Yes, you read that correctly. Make yourselves comfortable, kiddies, and get a load of THIS whacky Batman story, from 1970.

First, a little necessary background information, especially for those who aren't familiar with the weirder details of Beatles history:

The Beatles (John Lennon, Paul McCartney, George Harrison, Ringo Starr) pretty much dominated the entertainment news and music culture of the 1960s and early 1970s, even after the band officially broke up in 1970. Rumors and conspiracy theories about the group permeated the news, but none more so than the "Paul is Dead" claim. The story was that Paul, while working on the album Sgt. Pepper's Lonely Hearts Club Band, got angry, stormed out of the recording session, got in his Aston-Martin, crashed it, and died. Terrified that they would lose their audience (and their income) without Paul, the surviving Beatles used their influence to keep the news of Paul's death secret, and they found a look-and-sound-alike to replace him in the group. However, the Beatles being who they were (particularly practical-joker John Lennon), they couldn't resist sneaking references to Paul's death into their albums. Those clues, so the story goes, involved things like cryptic statements heard in songs played backwards, and symbolic imagery on album covers (such as the fact that on the cover of the Abbey Road album, Paul is the only Beatle who's barefoot, and he's walking out of step with the others).

No joke, this was a big deal. People used to get together and listen to Beatles albums backwards ALL the TIME, looking for clues to Paul's death. I was just a kid at the time, but I REMEMBER people talking about it ("No -- really, man! If you play "I am the Walrus" backwards ...!"). This rumor lasted WAY beyond the Beatles breaking up. Apparently a few people out there STILL believe it.

Then there's Batman #222, in which Batman and Robin actually try to SOLVE the mystery of "Paul is Dead."

For the story, for copyright and branding purposes, the Beatles were renamed to the Oliver Twists (the "Oliver Twists"? Seriously?), and John, Paul, George, and Ringo were called Glennan, Saul, Hal, and Benji (and, apparently, they recorded the song "Pink Submarine," rather than "Yellow Submarine"). For the sake of simplifying my story coverage here, I'm gonna call the Beatles by their proper names in my text instead of the made-up names.

The tale opens at Hudson University, where a bunch of students (including Dick Grayson) are listening to the radio and playing Beatles songs backwards: "'Sure was a ball, [Paul] -- too bad it's over' Who else could [Lennon] mean -- but [Paul McCartney]?'"

An announcement then comes over the radio that the Beatles are coming to Gotham City to prove that Paul is alive and well. Dick's buddies then talk him into seeing if Bruce Wayne can pull some strings to get the Beatles to appear at the university: "Your guardian ... is a big wheel in Gotham -- Maybe HE could swing it as a favor for you?"

Dick calls Bruce, and Bruce actually goes along with the idea -- mostly because, as Batman, he's intrigued by the conspiracy theory.

Surprise, surprise, the Beatles agree to meet with Bruce. They take a plane to Gotham and hop into Bruce's limo, whereupon Alfred whisks everyone away to Wayne Manor. They look like the Beatles, all right, complete with Sgt. Pepper outfits (except I always thought "Paul" in this story looked more like Jeff Lynne from Electric Light Orchestra [ELO], sans glasses). 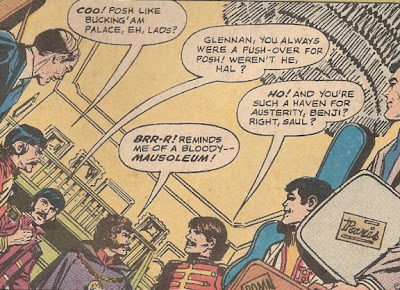 (Note: Throughout the story, readers are also treated to artist Irv Novick's tendency to include "ghosts" of super-heroes accompanying their alter-egos). 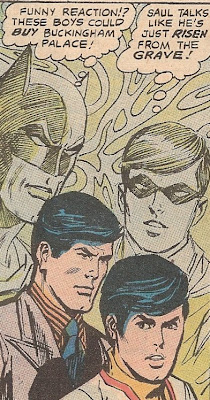 Dick and Bruce (or, the Batman and Robin ghosts) agree that, for now, Paul appears to be the real Paul. Paul then explains where he thinks the rumors of his death came from:

While Alfred shows the Beatles to their rooms, Dick confesses to Bruce that he recorded Paul's voice while they were talking. (Note: Recording someone's voice without their knowledge and/or permission is against the law, folks!) Dick then takes Bruce to the Batcave and plays the new tape of Paul speaking against a recording of him singing. Dick thinks that because the sonogram shows that the voice patterns in the two tracks are totally different, Paul must be an imposter. At least, he thinks that until Bruce points out that speaking and singing voices would have entirely different patterns, anyway (and you can almost SEE the implied "dumbass" on Bruce's face when he says so). 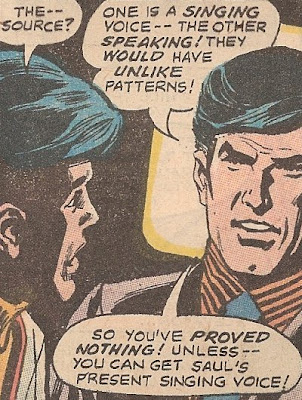 Oh, but Dick gets another chance to prove his theory: 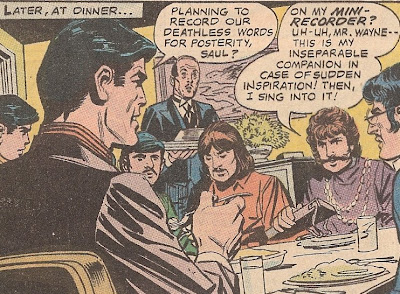 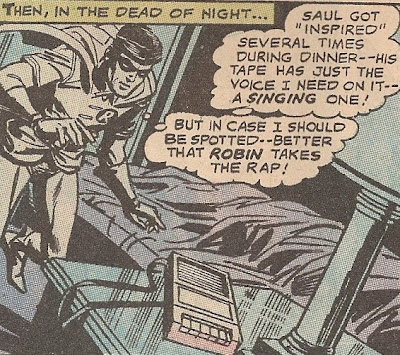 (Yes, Robin is also a thief. Remember that, folks.) 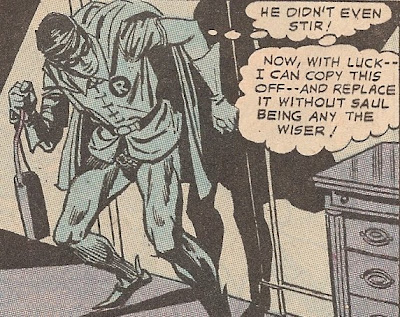 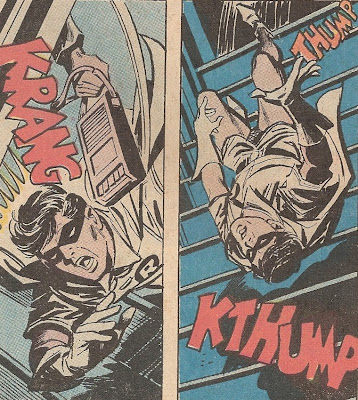 Unseen by the Beatles, Bruce drags Robin to the Batcave. Robin wakes up and confesses that he tried to steal Paul's tape-recorder, but Paul must have woken up and followed him. Bruce wonders why Paul is desperate to guard his recorder, and wonders if it's proof that he's not the real Paul. (Gee, Batman, MAYBE the poor guy didn't want his stuff taken by a burglar. Ever think of THAT?)

The next day, it's Bruce's turn to concoct a plan: 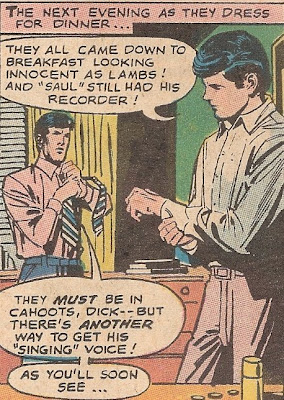 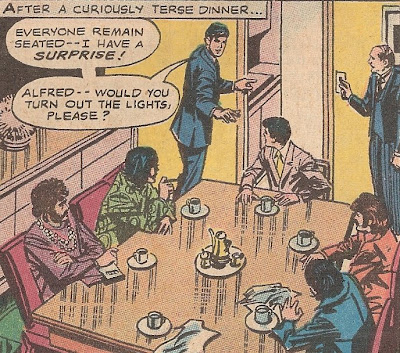 (Maybe they're terse because there's an obvious burglar problem in the house ...?) 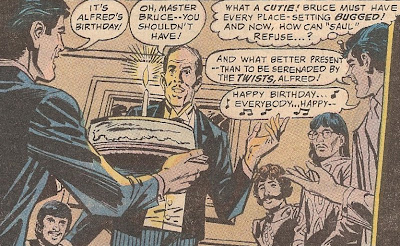 (Anyone want to guess as to WHY Dick thinks "What a cutie!"? I gotta admit, that's slang usage I've never heard before.) 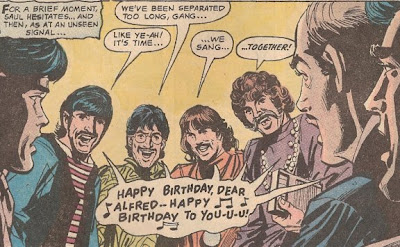 Batman then resorts to bugging the Beatles' outside calls -- proving once again that he was probably lying through his teeth to Morgan Freeman in the movie The Dark Knight. Batman picks up what he thinks is a call between Paul and a local recording studio, and he and Robin are soon off to set up more bugging equipment. However, when Batman and Robin get to the recording studio, instead of finding the Beatles there, they find a bunch of armed thugs, who immediately start attacking.

Batman and Robin easily defeat the thugs. Batman then says he wants to get a confession from Paul rather than from the thugs. He also announces that he's figured out how to solve the "Paul is Dead" mystery -- 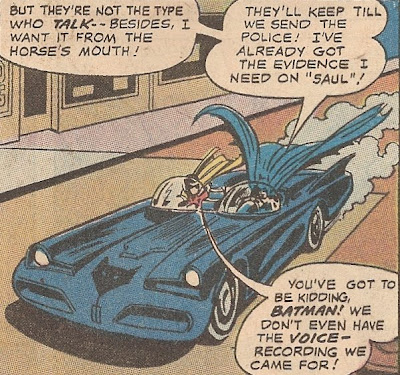 -- including the fact that it was completely unnecessary for him and Robin to have gone to the recording studio in the first place. 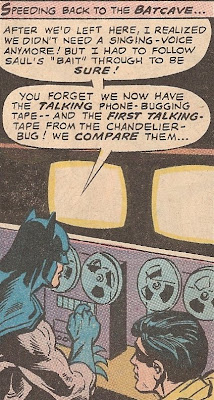 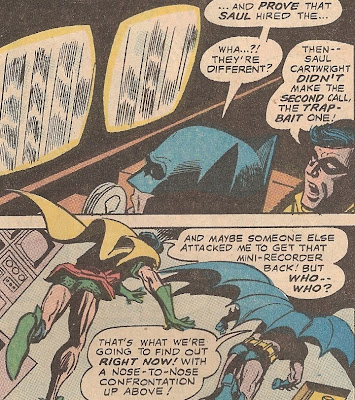 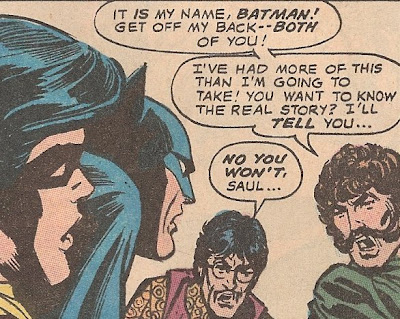 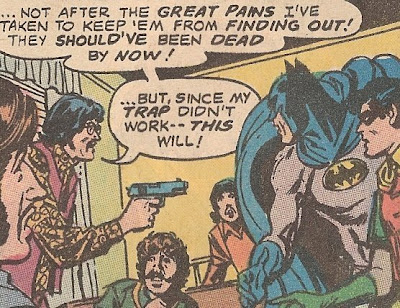 That's right, kiddies -- the guy who beat up Robin earlier in the story was none other than John Lennon. It gets worse: 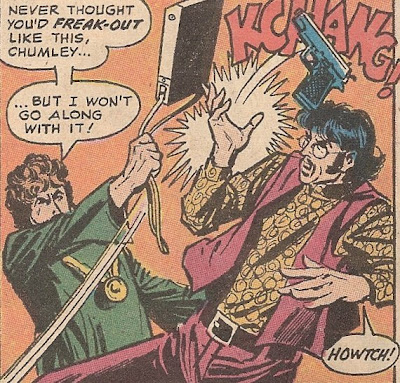 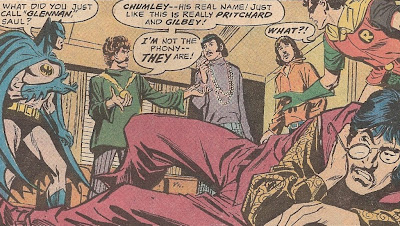 Yep. It turns out that Paul is the only real Beatle in the room. The rest got killed in a private jet crash in the Himalayas, during a trip to "groove with the mysteries of the East." Paul thought he could keep them "alive" for their devoted fans by hiring "three unknown look-alikes to stand-in for them," complete with "minor plastic-surgery" and voice training. Paul then invented the rumor of his own death to pull attention away from the other Beatles, so no one would suspect anything had happened to them. Problem was, John Lennon got greedy and started going to any lengths to protect their secret.

Yeah, you can see where THIS is headed now. Paul immediately puts together the group WINGS -- er, I mean -- The Phoenix Trio! ("Phoenix Trio?" Seriously?) 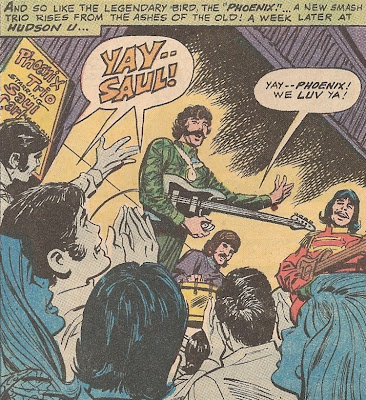 So, there you have it. Dick (Robin) Grayson is single-handedly responsible for breaking up the Beatles. The bastard. 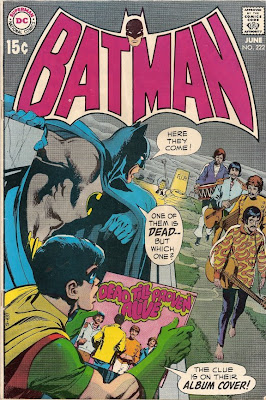 Well steal my shoes and dip me in Cranberry Sauce!

Love this post!!! I had no idea this ever happened in Batman ♠- GREAT stuff.

Poor Jimmy Olsen must have been so upset...him and his personal Beatles wig. :P

But seriously, who names their kid Chumley?

This is most horrifyingly odd and crazy thing I have ever seen.

also, I hate how americans write british dialogue.
'blokes'?
'weren't he?'
The Beatles were Liverpudlians not cockneys!
They make us sound like idiots.
NO I DON'T WANT ANY EFFING TEA!!

But ... but ... TOM, you KNOW that the greatest fake British accent in the universe was performed by Dick Van Dyke in Mary Poppins -- RIGHT? ;-)

tf, have you ever heard British writers and actors trying to reproduce American accents? Just a couple of weeks ago I had to sit through a performance of Tennessee Williams' Small Craft Warnings at the Arcola, and boy, did that ever set my red-white-and-blue teeth on edge!

it's not the accent that annoys me. it's the words.
british people don't go around calling everything 'bloody' or call each other 'bloke' or 'bruv'.

But wouldn't it be fun if he did?

hehehe, dumbass *snickers*
I have to ask, what was the conversation between Batman and Morgan Freeman in the dark knight? My memory fails me.

I echo tf, English people don't really talk like that...

No...although the teachers at the school I was attending did call the students "love" a lot, and use the word "brilliant" to excess.

I found it quite thrilling: "Gosh, they're speaking British!" ;-)

I blushingly admit that I didn't even really start paying attention to accents and speech patterns until I was in college.

I'm not sure if this was intentional, but Paul did have a track on his "Memory Almost Full" album entitled "222"...

I'm not sure if this was intentional, but Paul did have a live album entitled "Tripping the Live Fantastic"...

Finding freelance jobs for engineers is easy, but making sure the role is suited for your field and getting the job is the tricky part. Freelance VOIP Engineers


Managed Network Services gives you access to a wider pool of experts to help manage your growing business network needs. It provides proactive support to ensure issues are fixed in a timely manner and offers improved IT security to help protect your customers and employees. It also simplifies your cost management, resulting in a more productive and cost-effective business.

AEM Service packs like the Adobe Experience Manager bundle come with pre-configured security and database configurations, so that you do not need to deploy any additional atypical digital applications. These bundles also come with application up-sell and application uninstall features that help your employees manage existing installations more efficiently.

The author of the article post certainly has extremely impressive writing skills and I am really so happy. You can strengthen the blog even further by adding a few grammatical detailing that promises to take your written piece to another level I saw. You are genius buddy, keep sharing more. australia assignment -
thesis writing help -
assignment writers

I really want to advise you that I am new to writing and absolutely adored your website articles. Quite possibly I am probably to remember your content information's. You undoubtedly have excellent article data. Love it for telling with us your very own internet websites. medical assignment help -
java assignment help -
c sharp assignment help

Our extraordinary service allows you to gain the best of both worlds from impeccable technical knowledge to shrewd business understanding.

Dear Author, Thank you so much for the very helpful and wonderful article content share with me and my friends. Really its perfect information for me and other users. I am also writing some new article. Again thanks and good luck. Accounting Assignment Help -
finance assignment help -
law assignment help

amazing website, this is really some good quality content. loved the way you explained through words keep writing the best articleNEWS