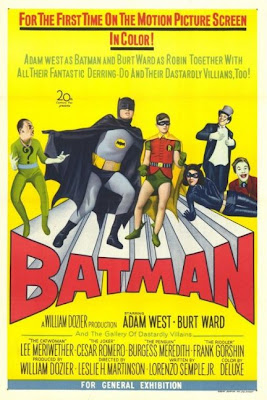 Batman (1966), starring Adam West and Burt Ward, and based on the popular ‘60s Batman TV show, is one of the campiest and funniest super-hero movies of all time. It’s so campy and funny, in fact, that some of my friends in college felt it deserved to have a drinking game affiliated with it. Several people have requested that I tell about the drinking game, so I’m posting the rules for it here.

Before I post the rules of this game, though, I gotta say DRINK RESPONSIBLY! Please don’t drink so much that you get sick. Please don’t drink underage. Please don’t drive drunk. In other words, don’t do anything even remotely stupid during or after drinking. After all, this game was created by a bunch of students from Indiana University, which has long had a reputation as a notorious party school –- and, hey, we were all idiots, anyway.

Okay, here are the rules of the game. Use whatever beverage you prefer –- just remember that if you drink strong stuff, you greatly reduce your chances of making it through to the end of the movie. All right, here we go:

1. Take ONE drink every time you hear a “BAT” reference (not including references to Batman himself).

2. Take ONE drink every time a henchman says, “YO HO!”

4. Take bonus/optional drinks when you hear any of the following quotes:

a. "Under this garb we're perfectly ordinary Americans."
b. "Support your police! That's our message."
c. "Salt and corrosion. The infamous, old enemies of the crimefighter."
d. “It was noble of that animal to hurl himself into the path of that final torpedo. He gave his life for ours."
e. "Disposing of pre-atomic submarines to persons who don't even leave their full addresses?”
f. "Penguin, Joker, Riddler, and Catwoman, too! The sum of the angles of that rectangle is too monstrous to contemplate."
g. "Banana. Russian. I've got it! Someone Russian is gonna slip on a banana peel and break their neck!"
h. “I've rarely met a girl who's such a potent argument in favor of international relations."
i. “Some days you just can’t get rid of a bomb!”
j. "Are you sure you didn't hurt your head in that fight, Batman?"

5. Now, here’s the REAL kicker. At one point in the movie, Robin asks Batman, "You risked your life to save that riffraff in the bar?" Chug ONE ENTIRE BEVERAGE upon Batman’s reply of, "They may be drinkers, Robin, but they're also human beings ..."

(With what we were drinking, no one remained upright much past Rule 5.)

Just printed out a copy for home use. Thanks!

Oh thank you, Sea. God, I love this movie. I'd be bombed in NO time.

It's funny, either people love the old Batman series, because it was good campy fun, or they absolutely hate it for "destroying" their francise.

I'm one of the lovers.