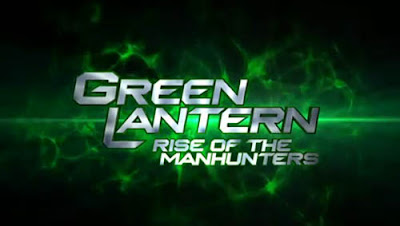 Let's face it – video games that are movie tie-ins usually stink. They almost always have poor graphics and they have gameplay that's either way too easy or impossibly hard, but never anything in between – AND they can generally be counted on to be hopelessly bound, creatively, by the movie they're based on. It also doesn't seem to matter if the original movie was a good one or a bad one – the game can generally be counted on to be bad. (Though Pixar films are visually state-of-the-art, there's yet to be a Pixar video game tie-in that looks [or plays] even half as good. The Harry Potter games started off promising and then became progressively worse in quality as the movie series grew and matured. And the James Bond video games, much like the James Bond movies, are hit-and-miss quality-wise.)

In spite of this woefully poor record, I actually picked up a copy of the new game, Green Lantern: Rise of the Manhunters. I expected it to stink as much as any other movie tie-in. To my great surprise, though, this game is actually FUN. 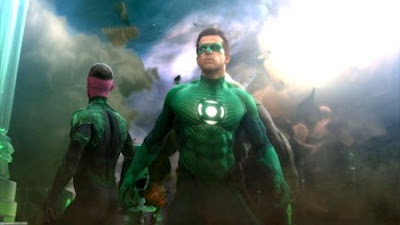 Maybe it helps that the game's only obvious ties to the Green Lantern movie are skin deep. It DOES use Ryan Reynolds' voice and likeness for Hal, and there are a few design elements from the movie – but all similarities to the movie end there. If you're at all familiar with the popular video game God of War, that's what this game is – it's God of War, Green Lantern-style, and it's AWESOME.

In the game, of course, as Green Lantern, you can generate constructs – some of which, like the maces-and-chains, are incredibly cool and do a great deal of damage. (My personal favorite construct is the giant baseball bat – and Hal has surprisingly good form swinging that thing.) The graphics are even rather good quality, especially for a movie tie-in. Everything is all nice and glowy and pretty, as you would expect the Green Lantern universe to be. 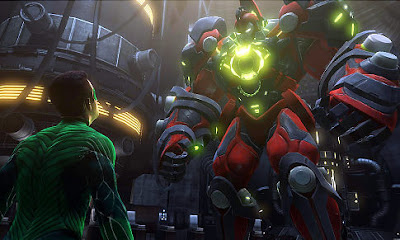 It's not a perfect game, by any means, but it's very fun to play – I found it neither too easy nor too hard, and just challenging enough. There are three levels of play: Emerald Knight, Enforcer, and Poozer(!). You begin with a few basic constructs and then can form much more elaborate constructs as you gain experience. The game also follows a plot that's very faithful to the Green Lantern universe: Hal, Sinestro, and Kilowog are on Oa. Hal has been a Green Lantern only for a little while, and the three Lanterns are making funeral preparations for Abin Sur. Suddenly, the Manhunter robots attack. The Guardians tell the Lanterns to (more or less), “GO GET 'EM, BOYS,” and the game is on!

The battle begins on Oa, moves to Zamaron, and then movies to Biot (the Manhunter homeworld) before moving back to Oa. The main protagonist is Hal, and in one-player mode you're stuck with being Hal. In 2-player mode, though, the second player gets to be Sinestro, and there are some very nifty attacks that Hal and Sinestro can orchestrate together. (I'm very fond of the Baseball maneuver, shown in the following image.) And while you don't get to play as Kilowog, you do get to fight alongside him a bit – and rescue him from the Manhunters. The other Lanterns really don't put in an appearance, but the Zamarons certainly do! 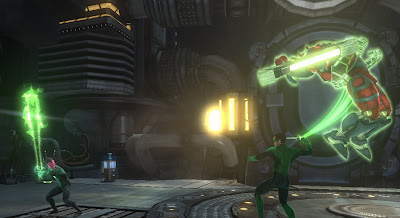 The main villain isn't one that's a huge surprise for regular GL readers, but the game creators did a good job of setting up the main bad guy – and the final battle. Along the way, there are plenty of bad guys, and plenty of big (Boss) battles. The way to get through the really tough battles is to come up with the right combination of constructs (Sword? Turret gun? Battle armor? Giant hammer...?) that's the most effective against specific foes. I'm not used to having to use shields when playing first-person fighting games, but I definitely had to use them in a couple of battles here.

- I think I'm too used to playing DC Universe Online, because I kind of resented the fact that my freedom of movement was restricted to what this game wanted me to do – but I guess that's normal for a game like this.

- The cut scenes are rather good, but there doesn't seem to be any way to skip past them. That became very annoying whenever I ran into a Boss that kept "killing" me, and I ended up having to re-watch the same friggin' cut scene over and over and over …

- Ryan Reynolds is GOOD as Hal, but I got kind of tired of him saying “What the hell” all the time. I blame the script.

- There are some flying missions, and the controls for those are a WEE bit too sensitive. It helps a lot, though, to build up Hal's ring power so that it surges. This encases Hal in a fighter jet, complete with heat-seeking missiles!

All in all, though – FUN game! Better than a movie tie-in game deserves to be, really.

There's one small, inspired detail in the game that I absolutely love. It's a precious, precious detail that's NOT in the movie. I'm not even sure it's ever, even been explored in the comics: In the game, Hal's ring talks – just like it does in the comics. The VOICE of Hal's ring is a WOMAN's voice. A very NICE and SEXY-sounding woman's voice. I LOVE that detail. It's so perfect, and goes a long way toward explaining a LOT about Hal's relationship with his ring. 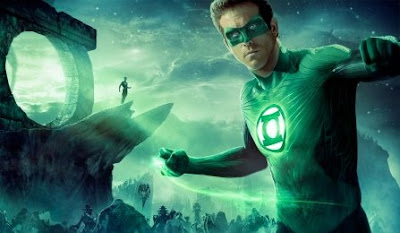 SPOILERS ahead: This movie was definitely influenced by a very specific GL fan – namely, longtime GL writer Geoff Johns, who is listed as a co-producer. The movie has his fingerprints all over it. Heck, even most of Kilowog's lines are straight out of Johns' Secret Origin story.

That said – I loved the movie. I really didn't expect to love it, but I was pleasantly surprised. So (I think) was most of the audience I was sitting with. I only read Roger Ebert's review prior to going to see the movie, because he and I agree more often than not on movies. He thought the movie was reasonably entertaining, so I figured it was worth my time and money. Hey, it's the Green Lantern universe, which is one of the most interesting universes in super-hero comics. That alone makes the movie worth at least a look-see.

Mr. Sea and I saw the movie Friday night at Trader's Point here in Indy. We sat in on the 2D version, and the theater was PACKED. Best of all, it was packed with people who were mostly wearing GL t-shirts, so I know we were in gloriously geeky company. As a whole, the audience seemed to really enjoy the movie. They laughed, and they CHEERED and CLAPPED. It's been a while since I sat in a theater with an audience that was having so much fun.

I also thought the movie was surprisingly kid-friendly, for a PG-13 film. There are some very slight hints at sexuality that would go over most kids' heads, and the villains can be a little scary, but I wouldn't hesitate to let Mighty Mite watch this movie. She loves action movies and super-heroes, and I think this would be a fun movie for her. GL fans expecting the blood and gore of the GL Corps comic would be VERY disappointed, though. GL fans expecting to see Secret Origin word for word are also going to be disappointed.

MANY longtime GL plot details and traditions have been changed for the movie, but they didn't bother me in the slightest – and I've been a Green Lantern (Hal Jordan) fan for 40 years. It's a MOVIE, not the comics. Quality-wise, it's not Dark Knight or Spider-Man 2 (it does drag in a couple of spots, and some of the editing is choppy), but I thought it was at least as good as the very first X-men movie.

Ryan Reynolds is FUN as Hal and gets some good lines ("By the power of Greyskull!"), and Blake Lively is a much better Carol Ferris than I thought she'd be. Bless her heart, she actually gets to do the ONE THING that I always wanted to see in the comics, because it's something I've always suspected of Carol (though for YEARS in the comics, Carol didn't let on about this AT ALL): In the movie, she recognizes Hal as Green Lantern ALMOST IMMEDIATELY. Best of all, she gives him HELL about his lame attempts to hide his identity (“I've seen you NAKED!”). It's beautiful – and very funny. 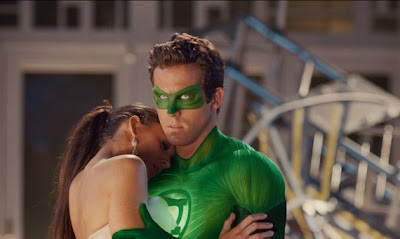 Actually, I thought it was a very funny film in general, especially for Hal Jordan fans. Let's face it -- Hal Jordan, the comic book character, is rather dull, and though Hal IS very heroic, he's also an arrogant jerk. Half the fun of being a Hal Jordan comic book fan is watching how his much-more-interesting supporting cast REACTS to the fact that he's such an arrogant, yet heroic, jerk. The movie is no different -- the other characters, including Hal's friends and family, give him hell every chance they get, and Ryan Reynolds does a good job of playing straight man to all of the verbal AND physical abuse hurled his way. It's hilarious, and very much in the spirit of the comics. I can understand how it would be off-putting to casual or more high-minded fans, though. (Just WHY is this a-hole a super-hero? Because the ring chose him. Sorry -- yer stuck with him.)

Tomar-Re and Sinestro are PERFECT, though this Sinestro comes across as so professional and noble, it's hard to picture him as the ruthless dictator that he becomes in the comics. A small scene halfway through the end credits, though, does point to impending corruption – and a good reason WHY Sinestro would become a villain.

There are LOTS of details that probably don't need to be in the movie -- except that they're there for certain GL fans. For example, Hal's brothers and nephew are in the film, in one scene. They don't need to be in the film -- it's a wasted scene. It's there only for people like ME -- "OMG, it's Jack and Jim! And Jack is giving Hal hell, as usual -- COOL!" The movie is FULL of throwaway stuff like that -- stuff that's probably completely lost on average viewers.

A few gripes: I've already mentioned that some of the scenes drag a bit, and some of the editing – especially when the movie switches back and forth between what's going on with Hal and Hector – is a bit choppy. AND it's yet another FRICKIN' super-hero origin story – I am SICK to DEATH of origin stories – but, oh well. There's also the obligatory hero-training scene – which really doesn't accomplish much in the way of training, but it's there to give Kilowog and Sinestro something to do. Also, some changes have been made to the villains Hector Hammond and Parallax that I don't really care for, but they make good sense for the movie. There is also a great deal of romance in the film (not sex, but ROMANCE) -- which viewers are either going to love or hate, depending on their level of interest in Hal's love life. All in all, though, I loved the movie, and it made for a good, entertaining night out.

The Captain America movie is next! Can't wait!
Posted by Sea-of-Green at 6:19 PM 7 comments: Links to this post