I repeat -- I really didn't expect to like this game as much as I do. Yes, I did pick up the full PS3 version once the game was released -- and I think I've mostly been "living" in the DC Universe since then. It doesn't help that my brother and several friends ALSO have the game and we've been getting together online to go beat up bad guys -- or beat up good guys. Gosh darn it, I am HOOKED.

The game is still kinda glitchey and has been experiencing a few "growing pains," resulting in some downtime. So far, these are merely minor annoyances, and the game environment has been sailing right along without too much trouble, at least from a player perspective. I have to say, design-wise, this is one of the better MMOs (Massively Multiplayer Online game) that I've seen. I recognize a lot of functional elements from other EA games, like the James Bond and Harry Potter games. Flying is still my favorite thing to do -- but, oh, the powers you can assign your characters are FUN.

Take Alligator, for example. Alligator is a lovely thing -- a villain I created. She's essentially a big female version of Killer Croc -- except she can turn into a pterodactyl. Now THAT's fun.

My favorite character so far, however, is a hero. I couldn't resist recreating my favorite public domain character from the Golden Age -- the Green Lama. He's been running around the DCUO Countdown world, and I've gotten him up to level 22 so far. My version looks a bit more blantantly superhero-ish than other versions (including even Alex Ross's interpretation), but I think he's still recognizable as the Green Lama.

Actually, for an obscure public domain character, the Green Lama has been a busy boy of late -- what with being an active superhero in Dynamite Comics' lineup , and starring in a pulp novel by Adam Lance Garcia. I haven't read that novel yet -- I really need to pick it up. For now, though, I'm gonna continue to have fun putting Jet through his paces in the DCU. 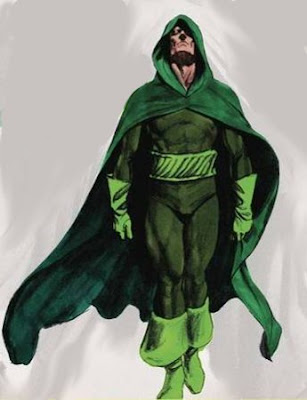 You DO love some Green Lama. But...what happened to his pixie boots?

There wasn't a pixie boot option for the costumes -- which also leads one to believe that, apparently, DC is trying to forget that Robin's old pixie boots ever existed. ;-)

What is the world coming to?

It is fun, isn't it? I was in the closed beta and really enjoyed it (that's where most of my time these past few months has gone), but now that the game is actually out, I can't afford to purchase it just yet. Woe!

I love being able to interact with so many DCU characters. The first time my villain explored the Hall of Doom, I think I squealed like a little kid when I saw the Flash's Rogues standing there advertising their own little faction.

Duskdog! It's so nice to see you!

And I really have to think seriously about getting this game.

I want this game sooooo bad. But alas, I have neither a PS3 nor a PC. If only it was available on the Mac! Then again, I'd never stop playing.

Yes, it IS very addictive. I have to admit, it has been taking up a great deal of my free time, to the detriment of computer time and other things.

Ps3- THE ARCADIAN, would love to fight along side true fans!