YES, I have seen the new trailer for the Green Lantern movie (linked at the end of this article). NO, I don't have an opinion as to whether I think the movie will be good or bad. It's only ONE trailer, plus I learned a long time ago that trailers are downright useless tools for predicting how good or bad a movie will be.

Take Pixar films, for example. With one or two exceptions (one being a particularly funny teaser trailer for The Incredibles), in my opinion, most trailers for Pixar movies are pretty lousy. They almost NEVER tell you ANYTHING about the movie in question -- they're very pretty, but very, VERY vague. RIDICULOUSLY vague, and also BORING. Nine times out of ten, whenever I see a new Pixar trailer, I think to myself, "Okay, now, other than the fact that the movie is a PIXAR movie, why the hell would I want to see it?" I mean, for a movie studio that has a reputation for being the most critically and financially successful studio in world cinema history, Pixar does produce some pretty lousy movie trailers. But that's just MY opinion. 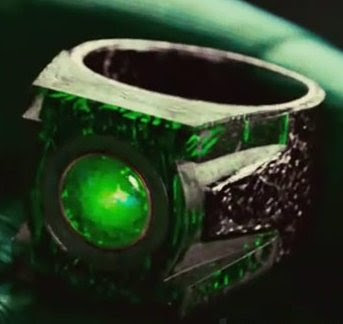 Ahem. Okay. Back to Green Lantern. Based on the trailer, as I already stated, the movie could be good, or could be bad (never mind that it's yet another frickin' origin story). I'd rather have a really good movie or a really bad movie as opposed to a mediocre one. Bad movies DO have some redeeming qualities, after all -- some make for great viewing BECAUSE they're so bad (the movie Surf Ninjas comes to mind). PLEASE-oh-please let the Green Lantern movie be really good or really bad -- but not boring! PLEASE!

I am happy, though, that Ryan Reynolds is Hal Jordan. I wasn't sure about him at first, but I've grown rather fond of him since seeing him in The Proposal. It helps that People Magazine recently called him the Sexiest Man Alive. As one of the sexiest super-heroes in comics, Hal Jordan SHOULD be played by an actor with that title. Hal Jordan himself would probably expect nothing less. Based on the trailer, Reynolds also seems to be channeling the Geoff Johns version of Hal, which is appropriate given Johns' involvement with the film.

The only thing in the trailer that made me wince was when Reynolds said, "One thing a Green Lantern is supposed to be is fearless -- that isn't me." Maybe it's just the way the trailer is edited, but the statement struck me as rather odd. Hal has indicated often enough in the comics (particularly in Sinestro Corps War and in Secret Origin) that he ISN'T fearless -- rather, he has the ability to overcome fear. Still, Hal has also stated that when people ask him if he's afraid of anything, he tends to answer NO because that's what people expect him to say. Based on that, the blurb in the trailer seems out of character. But, as I already stated, maybe it's just the way the trailer is edited. 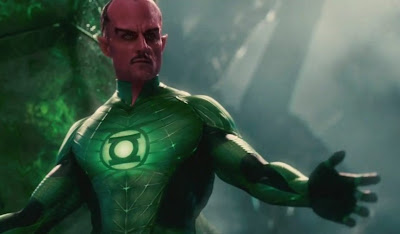 Still, it was fun to see Sinestro (as a GL!), and Tomar-Re, and Kilowog in the trailer. I'm also assuming that the man Hal is talking to near the end is Tom Kalmaku -- I'm GLAD to see Tom wasn't left out of the movie. As to the rest, well, I'm gonna wait and see how it all comes together. Fingers are crossed.

Posted by Sea-of-Green at 9:12 PM 8 comments: Links to this post

Even on a beer glass, Batman gets no respect

Catalogs have been showing up in the mail with alarming frequency of late, filled with goodies and potential presents for the holiday season. So far, I haven't found too many things in the catalogs that have caught my attention -- EXCEPT for a set of DC heroes beer glasses. There are four glasses in the set, each featuring a super-hero portrait on one side and a saying, of sorts, on the other side. First, of course, there is the Superman glass:

The back of his glass says:

Man of Steel. Nothing terribly pithy or witty -- just Man of Steel. Well, that's okay. We all know Superman is the Man of Steel (really, though, with what we know about metals and alloys these days, shouldn't he have been upgraded to at least the Man of Lutetium by now?).

Next is the Wonder Woman glass:

The back of the Wonder Woman glass says:

Glass #3 of the set depicts Hal Jordan/Green Lantern. I'm pretty happy about that, actually. In the past, we were most likely to see Aquaman or the Flash. It's nice to see that Hal is currently in the "top four" for the general public:

On the back of Hal's glass is part of the Green Lantern oath, naturally:

Last, but certainly not least, is Batman's glass. HERE is the front:

Not bad, not bad. Now, what do you suppose the back of HIS glass says? Does it say, "Criminals are a superstitious and cowardly lot," or something to that effect? NOPE. The back of Batman's glass says?

Bam, pow, bang. That's it. BAM, POW, BANG. It seems that after all this time, and after all of the movies, animated series, graphic novels, etc., etc., Batman STILL hasn't shaken off the spectre of the 1960s. *Sigh.*
Posted by Sea-of-Green at 8:48 AM 7 comments: Links to this post