I love my husband's company. Not only do his bosses sometimes make tickets to sporting events available to him, some of his co-workers have taken it upon themselves to look after ME as well. Case in point: Yesterday, Mr. Sea was sent home with a permissions form that reads, verbatim:

I (wife of Purchaser) do hereby authorize my stupid husband to purchase NFL tickets for the November 28th, 2010 game between the Indianapolis Colts and the San Diego Chargers.

This permission form serves as notice that this does not interfere with our 2010 holiday plans and will not be grounds for divorce, although he may sleep in the garage if it turns out to be a really good game and he takes anyone other than me.

Truly, I have guardian angels in strange places, for strange things.
Posted by Sea-of-Green at 3:24 PM 4 comments: Links to this post

How many of you longtime comic book readers have ever, actually owned Sea-Monkeys? Sea-Monkeys, for those who aren't familiar with them, are tiny little "instant" water "pets" that, all through the 1970s and 1980s (and perhaps beyond), were regularly advertised in comic books with big, bright, colorful ads like this one: 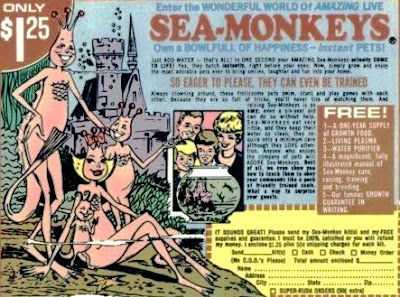 Aww, aren't they so cute and funny? Don't you want some? Of course you do! MANY people did. That's why many people who saw this ad in their comics clipped out the little order form and mailed it in, along with a check for $1.25. What Sea-Monkeys turned out to be, though, were tiny, swimming shrimp that looked like THIS: 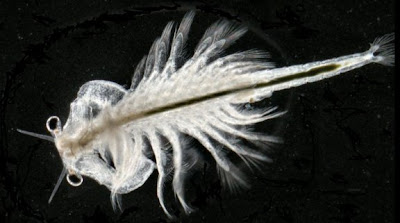 The photo shows a greatly magnified "Sea-Monkey," of course. Still, it doesn't exactly look like the cute little ad from the comic books, right?

I actually had Sea-Monkeys once. They were interesting for about three days, swimming around their fishbowl and doing the kinds of fancy underwater acrobatics that you'd expect tiny, swimming shrimp to perform. Then, very quickly, they just got -- well -- disgusting. Sea-Monkeys/shrimp are not the most hygienic of critters, and it was hard to keep their fishbowls clean without crushing or just LOSING the little critters. They also DIED very easily, littering the bottom of their bowls with their little shrimp bodies -- which were then eaten by the OTHER, still-living Sea-Monkeys, no matter how much food I gave them. Disgusting.

Still, Sea-Monkeys were proof that advertising in comic books WORKED, at least for a while. These days, you aren't likely to see an ad for something like Sea-Monkeys in comics -- mainly because advertising in comics has become VERY expensive. Comic book advertising is currently on par, price wise, with that of other four-color print magazines -- i.e., in the thousands of dollars. That's why ads for things like Sea-Monkeys have been replaced with Got Milk? or automotive ads. But, do the ads still WORK? Granted, the average comic book reader is older and more affluent now than in the past, but do readers actually buy the mostly high-ticket items currently advertised in comics books?

I think they might, just based on my own experience.

Late last summer, I was forced, at last, to acknowledge that I had to retire my old, beloved Saturn. Though I loved my car, it had several problems. First, there was the announcement that the Saturn brand was being discontinued. I had an old model, anyway, but the discontinuation of the entire line meant it was going to start getting VERY difficult to find affordable parts for repairs. Second, the car was starting to have mechanical problems, stemming mostly from the fact that it had over 140,000 miles on it. Third, there was hardly any back seat to speak of, which meant I couldn't fit a car seat in it for Mighty Mite. VERY inconvenient. So, it had to go.

To replace my Saturn, I fully intended to get a used PT Cruiser. I like Cruisers. The basic models are very affordable, they do everything I need a car to do, and I've driven enough of them to be very comfortable with them (Mr. Sea is currently on his second one -- a CONVERTIBLE). Plus, with the economy being what it was, I was convinced I could get a good deal on a car -- dealerships around here were DESPERATE to sell something, ANYTHING. So, during a lunch hour late last August, I visited a local Chrysler/Dodge dealership to look at used Cruisers.

As I was marching across the dealership lot toward the Cruisers, I saw a car that literally stopped me in my tracks and made me say, out loud, "What on earth is THAT thing?" It was THIS:

The unlovely car in question is a black Dodge Caliber. At the time, I had no idea why the thing attracted my attention. It looked to me like an ugly black tank -- not at all like the quirky "retro London cab" styling of a PT Cruiser. Regardless, I was inside the thing in seconds and was soon demanding a test drive. After the test drive, and after finding out that the car had all SORTS of hidden compartments and weird gadgets (fold-down speakers, a detachable interior flashlight, and a frickin' DRINK COOLER in the glove compartment), I actually gave the car a name: Black Beauty, after the Green Hornet's car. That was it. The car was mine.

After signing all the paperwork and getting the car home, I found myself sitting in on my porch and just STARING at the Caliber parked in my driveway. I LIKED it -- I still do -- but it wasn't exactly what I had in mind for a new car. Calibers don't exactly look like the types of cars I'm usually attracted to. I had no idea what had happened. How on earth did I end up buying this ugly black car? Was I brainwashed somehow? As far as I knew, I'd never even HEARD of Calibers before. How I ended up with one was a bit of a mystery ...

... until recently. While organizing my comics and flipping through some issues of Green Lantern that were a year or so old -- issues that I had read SEVERAL times each -- I saw THIS centerfold ad: 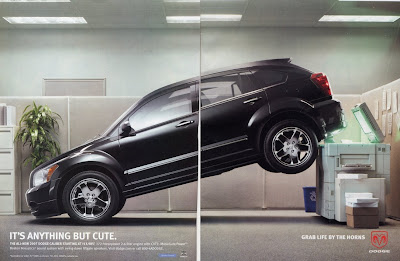 I flipped through more Green Lantern comics and saw the same ad several times. I also saw THIS one: 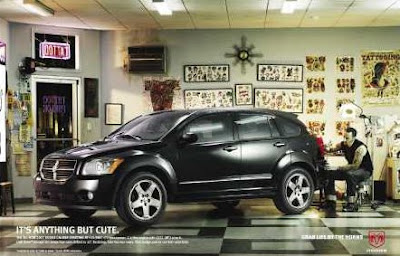 I'm convinced. Thanks to comic book advertising, I was brainwashed into buying a black Dodge Caliber. It's the only explanation.

Awww, but I love my car. At least it's cleaner than my Sea-Monkeys were. Plus it hasn't tried to eat any dead cars -- so far.
Posted by Sea-of-Green at 1:46 PM 7 comments: Links to this post

As good as basketball gets 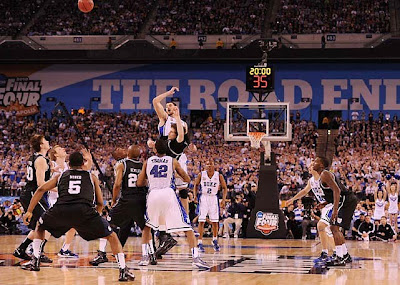 Well, Duke won the NCAA men's basketball championship -- but, as one of the announcers said, "Butler DIDN'T lose." Geez loweez, what a thrilling game! Many people predicted that Duke would blow Butler away. That didn't happen. Butler was a dead-even match for Duke and both teams fought very, very hard to the last second. Duke just happened to have a slight lead at the final buzzer -- and that final, heart-stopping shot at the basket. The game was as good as basketball -- as ANY game -- gets, at ANY level.

Well done, Butler Bulldogs, and thanks for a great ride! Looking forward to seeing you again next year!
Posted by Sea-of-Green at 8:42 AM 2 comments: Links to this post

You know you're in Indiana when ...

... you arrive at the repast (memorial dinner) after a funeral and find everyone huddled around the TV to watch the NCAA men's basketball tournament. :-) 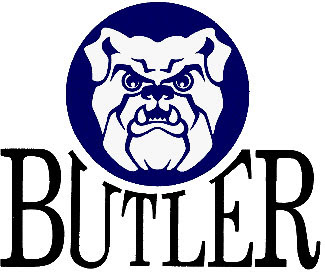 The BUTLER UNIVERSITY BULLDOGS WON! They beat Michigan State! WOOO HOOOO! A small college team from Indianapolis is in the championship game! Oh, man -- we Hoosiers LIVE for this sort of thing. Congratulations Butler! GO DAWGS!