Kirkus Reviews has been saved by a Hoosier!

Well, well, well ...! It doesn't look like Kirkus Reviews is going to bite the dust anytime soon after all! The review magazine has been purchased by none other than Indiana business big-shot Herb Simon, who owns a vast amount of property around Indianapolis, amongst other things, including the Indiana Pacers basketball team (though the current team is a far cry from the heyday of Reggie Miller, Rik Smits, the Two Davises & Company). Mr. Simon's reason for buying Kirkus and saving it? He's a longtime fan and subscriber, and he loves books.

That's a rather sweet reason for a business man to buy into a publishing business, and Mr. Simon IS a rather smart business man, but this also has me a bit worried. I've experienced first-hand what it's like when someone buys into a publishing venture because they think "books are cool." I once worked for a rather large, well-known publishing company that was bought out by Paramount Pictures. The Paramount purchasers (who evidently knew nothing about book publishing) allegedly thought that the publishing company would be a fun business to run, make them lots of money, and naturally tie-in with Paramount's motion picture projects. They found out the hard way that publishing businesses are very, VERY tricky to run.

Now, let me tell you: being run by Paramount Pictures was an absolute BLAST when it came to the work environment. We were ALWAYS getting freebies tied to Star Trek and other Paramount properties -- movie posters, free movie tickets, access to sneak previews, t-shirts, etc. In no time, my office was decorated in wall-to-wall Star Trek, complete with stand-up cardboard figures of the Next Generation crew.

Then there were the parties! Paramount threw FANTASTIC parties for us. I remember one particular Christmas party in which Paramount rented out the entire Indianapolis Children's Museum for an evening -- the largest one in the world, by the way. The bash included INCREDIBLE catered food and tons of booze -- all free for the publisher employees. Let me tell you, there's nothing like getting stinking drunk and then riding the antique carousel ten times in a row, or heading into the then-Theater-In-The-Round to watch the "Roller Coaster" film. It's amazing I didn't throw up. (I also suspect the Children's Museum slapped Paramount with a HUGE bill after THAT party, what with all of the cleanup they had to do -- beer and wine glasses everywhere, amongst other things.)

Yes, working for Paramount was fun. It was also doomed. Paramount (at least at the time) didn't know the first thing about running a publishing company, and we started losing money hand over fist. By the time Paramount panicked and decided to unload us on another, smaller company at a loss, the damage was already done. The publisher never recovered. I really, really hope Herb Simon doesn't make the same mistake with Kirkus. Fingers are crossed!

Posted by Sea-of-Green at 9:27 AM 9 comments: Links to this post

The SAINTS?! Heck yeah, the Saints! 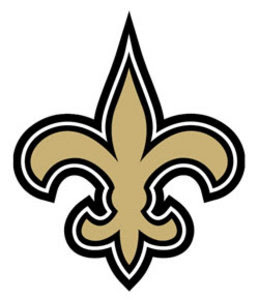 Yes, I got the Super Bowl matchup that I wanted -- the Indianapolis Colts vs. the New Orleans Saints. YES, the Saints kicked our butts. But, you know what? That's all right! I mean, heck, the Colts have BEEN to the Super Bowl before -- and we won. The Saints didn't have that feather in the cap before -- and if any city deserved a Super Bowl win, it was New Orleans. Best of all, the Super Bowl this year didn't consist of two teams that were there purely due to a fluke. Both the Colts AND the Saints deserved to be there, both having gone undefeated for 13 straight games during the regular season. And the Saints didn't have to beat just ANY team to win the Super Bowl -- they had to beat native son Peyton Manning (Archie's boy!) and the Indianapolis Colts. Hardly pushovers! It was a good game.

Besides, Saints quarterback Drew Brees has Hoosier connections -- he was quarterback at Purdue University. And cornerback Tracy Porter played at my alma mater, Indiana University. So, this wasn't a TOTAL loss for my home state of Indiana.

Well done, New Orleans! If we had to lose to someone, I'm glad it was you. You deserve the win. :-)
Posted by Sea-of-Green at 9:25 AM 5 comments: Links to this post

Apparently, some people have been wondering why I never followed up on my long-ago post on Superman: New World of Krypton #4, which had cover art showing Hal (Green Lantern) Jordan vs. Superman (in his "Krypton cop" uniform).

Well, the reason I never followed up is because the cover -- as is often the case with comic books -- is deceptive. Sure, Hal puts in an appearance in the issue, along with fellow Lanterns John Stewart and Sodam Yat. The Lanterns arrive on New Krypton to do some reconnaissance work -- and that's about it. Hal gets to be all self-righteous. General Zod expresses a grudging respect for Hal's power. Sodam Yat expresses interest in seeing what Kryptonians are like. John Stewart gets to tell Hal to chill out. Hal gets to fire off one last snarky comment at Superman before all of the Lanterns leave New Krypton. That's about it. There's absolutely no fighting between any of the Lanterns and/or Superman.

Based on DC's track record, THIS is probably the closest we'll ever see to a real "conflict" between Superman and Hal Jordan: 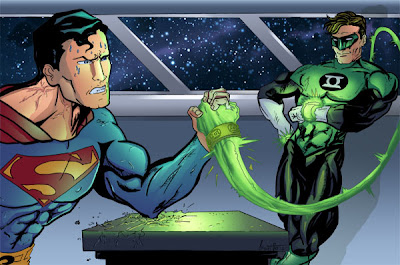 I have no idea who did this drawing, or where it comes from, but it cracks me up. Quit looking so smug, Hal -- you dirty cheater!
Posted by Sea-of-Green at 10:16 AM 5 comments: Links to this post