The darkness of Disney 7: Destino

The art of surrealism is often the stuff of nightmares, literally -- and despite the contrary complaints of his peers and critics, no one was better, or more successful at it, than Salvador Dalí. Dalí, who firmly adhered to the writings of Sigmund Freud, was quite adept at depicting his dreams in his art, including his nightmares -- and his nightmare images appear in a great number of his works. 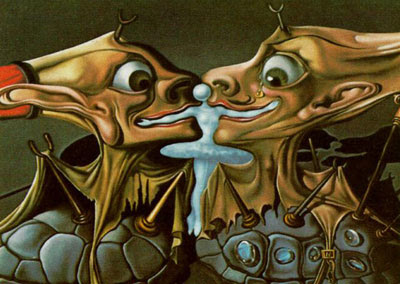 In the early 1940s, Dalí met Walt Disney, and the two soon began collaboration on an animated short film called Destino. The film was to feature Dalí’s artwork -- nightmare images and all -- and music written by Armando Dominguez. Between 1945 and 1946, only a short portion of the film was animated before the entire project was shelved. It remained shelved until 1999, when Walt’s nephew, Roy, unearthed it from the studio archives and decided to have the film finished. The film, which includes the original animated segment from 1946, was finally completed and released in 2003.

That is just beautiful... I love it combined with the music, too. It really works well.

Thanks for sharing, I'd never heard about this :-)

Good Grief! I've never even heard of this before!

heard there had been some collaboration, but this is the first time I've seen it. Beautiful stuff! Dali and Disney was a combination that had to work, surely... loving this series so far!

I think they really did a great job with this film. Dali's artwork translates to animated form surprisingly well.