The darkness of Disney 14: The Headless Horseman

In 1959, Disney released The Adventures of Ichabod and Mr. Toad, a package movie featuring animated adaptations of Washington Irving’s New England ghost tale, The Legend of Sleepy Hollow, and Kenneth Grahame’s classic childrens’ novel, The Wind in the Willows. The two stories, so different from each other, made for a rather odd pairing, and indeed have been rarely shown together since 1959. The “Ichabod” segment – and its famous Headless Horseman scene -- became particularly popular on U.S. television throughout the 1970s, due to Disney regularly showing it on the television program, The Wonderful World of Disney, for Halloween. 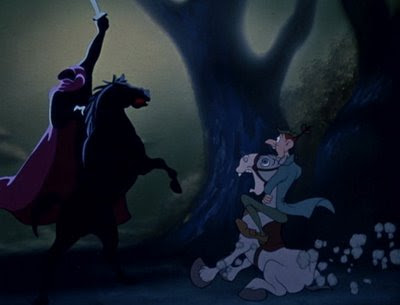 Disney’s version of The Legend of Sleepy Hollow, which is narrated by Bing Crosby, is actually very faithful to Irving’s original story. Where it differs most is in the treatment of the Headless Horseman. Irving’s story leaves readers little doubt that Ichabod Crane’s rival, Brom Bones, is masquerading as the Headless Horsemen. However, Disney’s Horseman is a much more fearsome and apparently supernatural figure, causing audiences to doubt that Brom Bones has anything to do with the apparition. Ichabod Crane himself, along with his horse, is treated comically, but there’s nothing comic about the Headless Horseman. Upon initial release of the film, some audiences found the scene with the Horseman so frightening that many theaters banned the movie.

Ohhh...Good call on this one!

I had forgotten how much this cartoon from Disney used to scare me as a kid, and as an adult I just loved the way Disney made such a great version!

Brom always reminded me of Gaston from Beauty & the Beast. They are these handsome jerks that seem to want to sabotage the other characters. I think that was interesting take from Disney.

I know this will sound random...

But I watched the video with the sound turned down, whilst listening to King Crimson's Court of the Crimson King...

It was surprisingly well synchronised...
And I find Ichabod waaaaaaay more disturbing than the horseman. Seriously, that man is weirdly disjointed.

Yeah, Ichabod ain't exactly the Greek Ideal, is he?