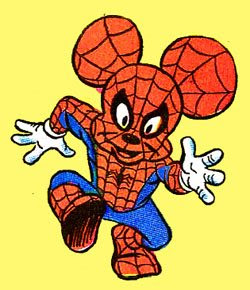 As all of you comic book readers out there already know, Disney has announced that it's buying Marvel, and everything that goes with it, for four billion bucks. For some reason, I find that incredibly funny. Not really sure why.

DC, to me, has always seemed more "Disney-ish" than Marvel -- and yet DC is owned by Warner Brothers, home to the perpetually cool and hip Bugs Bunny. Marvel seems more Bugs-friendly than DC, and yet now Marvel is going to be part of the House of Mouse empire. Mickey Mouse hanging out with the Punisher? Somehow, that doesn't seem right. Its successful forays into dark entertainment aside (Fantasia? Nightmare Before Christmas?), Disney still seems just a little too warm and fuzzy for Marvel.

Not to say that the DC characters are necessarily warm and fuzzy, or unhip (THE BATMAN, anyone?). They've just always seemed more family-oriented (and therefore Disney-oriented) than the Marvel ones. Blame it on Superman. He started the whole trend. I can see Spider-Man hanging out with Bugs Bunny MUCH more easily than I can picture him with Mickey Mouse (though the idea of Batman hanging out with Mickey Mouse is pretty darned funny).

This whole thing is making my brain hurt.

So, does this mean The Incredibles are now Marvel super-heroes? I'm expecting fractured family angst (and the kids showing up on an X-men team) any day now! 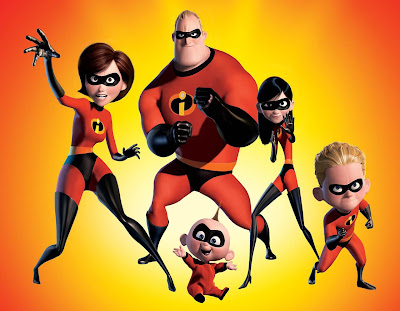 Posted by Sea-of-Green at 2:08 PM 4 comments: Links to this post

Awww, isn’t my brother the nicest guy? He pre-ordered the PlayStation 3 version of the new video game, Batman: Arkham Asylum, for me and brought it over this afternoon. I must be doing something right.

Okay, let’s fire this game up and see what we got here. I’m going to start off in Easy mode because, hey, I’m a wuss: 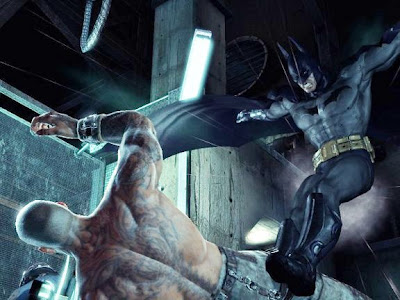 - Wow. This game looks GORGEOUS so far. Gloomy, but GORGEOUS.

- Kevin Conroy and Mark Hamill! Oh, how I’ve missed them!

- This bat was made for walkin’…

- This intro is really long. It’s entertaining, though, thanks to Mark Hamill’s Joker. It also gives a really good sense of just how deeply into Arkham the Joker is being taken.

- The backgrounds are awesome. SO detailed.

- Agh, the lights went out! Oh, wait – they’re back on, and Batman has his hand around Joker’s neck: “What, don’t you trust me?”

- I’m really missing Bob Hastings as James Gordon. I think the presence of other voice actors from Batman: The Animated Series has spoiled me.

- Well, yeah, the Joker IS obviously up to something, Batman. And yet you bring him to Arkham, anyway?

- Yep, the Joker's on the loose, and he and Harley Quinn have taken over Arkham. Imagine that.

- The fighting looks great, and you can do a lot, but there’s this brief slow-motion pause in the action just before every third punch/kick connects with the bad guy. Right now I find it kind of annoying.

- Does Batman always have to walk at an angle like this?

- There are chattering teeth on the floor. Stepping on them doesn’t seem to do anything, but I’ve been encouraged to knock them out with batarangs. I guess this is just supposed to be batarang training – but I kind of hoped the teeth would be a genuine threat.

- There seem to be plants everywhere. Gee, I wonder why.

- Lots of half-naked goons in gray pants around here …

- And then he calls Oracle. Way to work alone, Bats.

- Zsasz? Really? That’s a pretty obscure Batman villain. Not sure most people will know who he is. That’s kind of disappointing. I’d prefer seeing Batman fight one of the more well-known villains first. 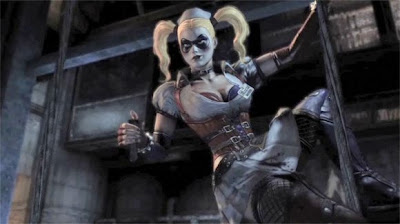 - There’s really nice interactivity with the background characters/Arkham employees. It makes me genuinely care about these people. That’s a very nice touch.

- This game still looks gorgeous – even though Arkham is a real dump.

- Detective mode! Nice, nice, nice – and SO appropriate for Batman.

- I”ve changed my mind about the pause in the fighting. I like it. Every attack/punch/kick looks different, even if it really isn’t.

- Holy crap! What’s THAT thing?! Oh, goody, my first boss fight. I have no idea who/what this thing is I’m supposed to fight, though.

- Oh, so THAT’s how you defeat him. Well, that was pretty easy, once I figured it out.

- Look at that map! Great jumping Jehosaphat, this place is HUGE!

- Background music consists mostly of atmospheric sounds, like in the Chris Nolan Batman films. It’s a nice compliment to the action, and I don’t find it annoying at all. Video game background music is often too loud or distracting, but not this music.

- Still working on trying to get out of here, which is the goal at this point …

- I’m out! I’m out! Wow, this game is gorgeous – and I was right about the environment being huge. Nevertheless, first “objective achieved,” and I earned a “Born Free” trophy. Whew! There's still a long way to go, though. 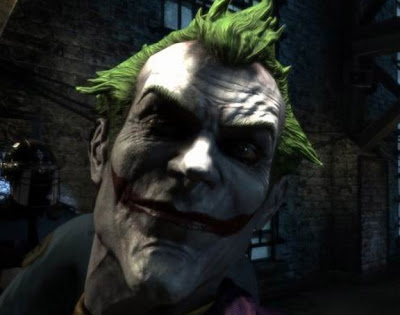 Okay, since this is a PlayStation 3 game that was pre-ordered through GameStop, I want to pause for a moment to go play with the Joker and Scarecrow downloadable add-on freebies. Here we go …!

- First freebie – Joker fighting Arkham guards. The Joker is actually HARDER to use in a fight than Batman. Still fun, though.

- Second freebie – Batman fighting skeletons in a Scarecrow-induced environment -- or, rather, Batman trying to avoid being touched by the skeletons for as long as he can. Fun! It’s also very cool – it’s like Batman encountering a bunch of Harryhausen skeletons. The Scarecrow’s been redesigned so he’s wearing a gas mask. Makes perfect sense. I like this freebie better than the Joker one.

Okay, I’ve been playing this game for about three hours now, and here’s my official report up to this point: I LOVE it. Despite my gripes about some of the functional details, I’m really enjoying the heck out of this game. The functions (at least in Easy mode) are challenging yet simple to use, and the game is NOT a hand-killer, which I appreciate very much. The game also, actually seems to have a decent story. That might be because I’m so familiar with Batman’s world, but the action and events are really doing a great job of moving me through the game. It’s almost like LIVING in a Batman comic. True to the character, you have to THINK your way through this game. It isn't just a punch-out game like Mortal Kombat vs. DC Universe.

Despite the voice actors from Batman: The Animated Series, the game IS more like the Batman comics than any of the movies or animated series. The story, background, and presentation seem to be a blend of the comics, movies, and animated TV series, but the game FEELs mostly like the comic books, if that makes any sense. It’s brilliantly done.

There are a few functions that I wish were slightly different, such as being forced to view Batman walking at an angle. I understand it’s done to help players see the environments better, but really, I’d prefer a more Grand Theft Auto-style approach. Nevertheless, it’s an enjoyable game to play. So far, I think this is the best superhero-based video game I’ve ever played.

It’s a little too intense for little kids, and has some naughty language; otherwise, I highly recommend this game to any Batman fan – and even non-fans! 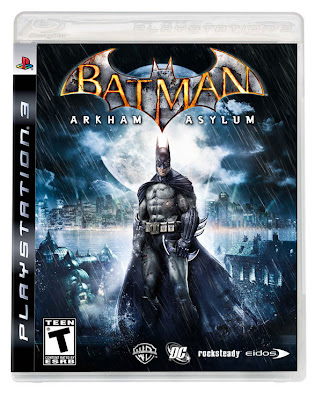 Posted by Sea-of-Green at 9:32 PM 4 comments: Links to this post

There is such a thing as knowing a comic book character's history (in this case, Green Lantern) a little too well.

Warning: The following is a spoiler for long-time Green Lantern readers, but it probably won't matter to newbies.

I've been saying all along that the force behind the Black Lanterns was probably going to turn out to be Nekron, Lord of the Unliving, from the old Tales of the Green Lantern Corps trilogy from 1981 -- copies of which I've owned since 1981. The truth is, I was hoping that WOULDN'T be the case. I was hoping for something totally unexpected. Now it's been revealed that, yes, it IS Nekron -- and I'm feeling kinda let down by it. I'm now looking at Blackest Night as merely being the same ol' Green Lantern Corps storyline on steroids. As I said, there IS such a thing as knowing a comic book character's history a little too well.

I'm just waiting for Krona to show up now. It won't surprise me if he does. *Sigh.* 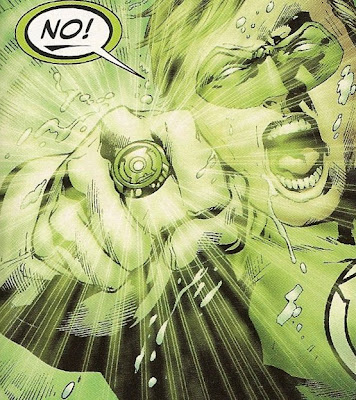 Posted by Sea-of-Green at 9:01 AM 6 comments: Links to this post

I was recently reminded of a drawing by Ethan Van Sciver that I just HAD to track down and post here. It appeared on eBay a couple of years ago -- I lost the bid on it, and I'm STILL kicking myself over it. Luckily, I still had a copy of the image stashed away in my archives. I have no idea who owns the drawing now, but I would still love to have it: 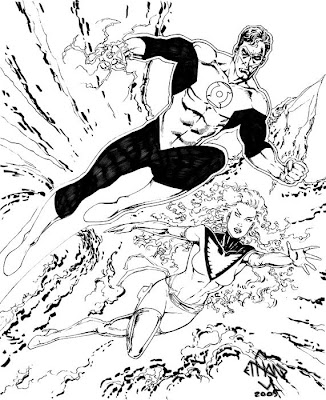 Hal (Green Lantern) Jordan with Jean (Phoenix) Gray! What an odd and completely logical pairing. That they have a lot in common goes without saying (cosmic powers, possession by powerful alien entities, universe-altering trips down the dark side, dying and coming back to life, etc.). The next time DC and Marvel get together for a cross-over, this is a match-up I'd LOVE to see. And, hey, I can seriously see Jean forming a romantic interest in Hal. She has a history of hooking up with jerks, anyway.
Posted by Sea-of-Green at 9:13 AM 3 comments: Links to this post