In Blackest Night #0, readers are presented with a scene in which Hal (Green Lantern) Jordan and Barry (the Flash) Allen are discussing the revolving door of death -- particularly in relation to their own deaths -- in the DC universe. At one point, Hal talks about his and Barry's funerals and tells Barry (who seems slightly horrified by the topic) about how differently their deaths were treated: 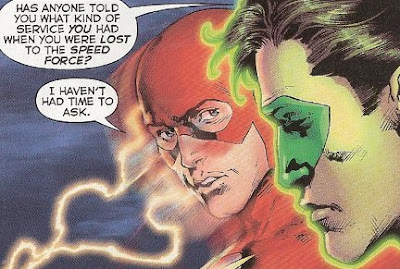 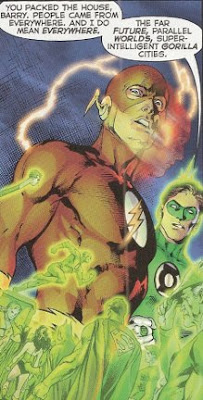 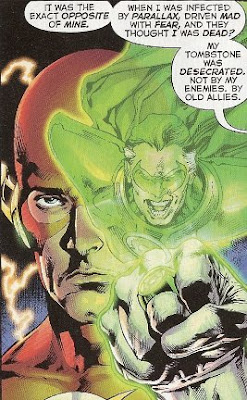 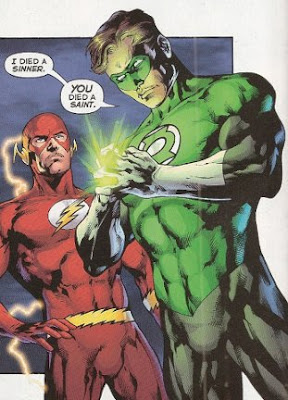 Now, hold on one second ... Longtime Green Lantern readers know that Hal has been feeling more than a little guilty about the time he was possessed by Parallax. However, his guilt seems to have given him a skewed memory of his funeral.

True, when Hal was Parallax, he was quite a nasty and powerful bad guy. He did horrible, horrible things. However, a lot of people (including Superman) felt that Hal had gone a long way toward redeeming himself when he sacrificed himself to reignite the sun and save Earth. Based on that, and on all the good Hal had done as a Green Lantern, it was felt by many that Hal deserved a nice, big memorial service, to remember the hero he had been.

Per Green Lantern #81 (1996), Hal's memorial service was held in a huge, gorgeous cathedral that Kyle Rayner whipped up on the site of the original Coast City (which hadn't yet been rebuilt -- that wouldn't happen until Green Lantern: Rebirth): 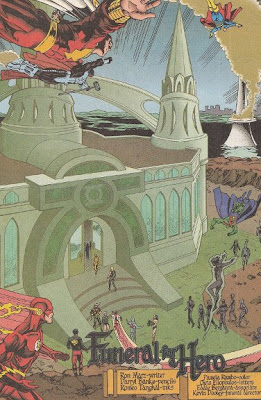 In attendance was darned near every hero in the DC universe, including a few members of the Green Lantern Corps, like Salaak and Brik ... 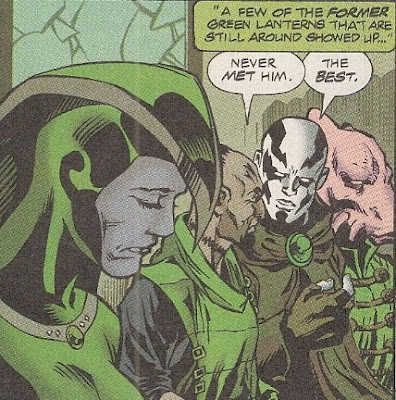 ... AND some of Hal's old villains, like Sonar and the original Tattooed Man: 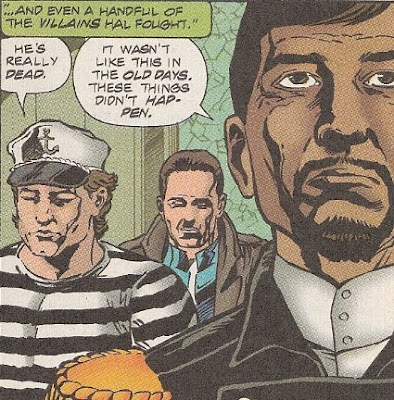 Even the "Batman Family" attended the funeral, though Batman couldn't resist griping about Hal, as usual: 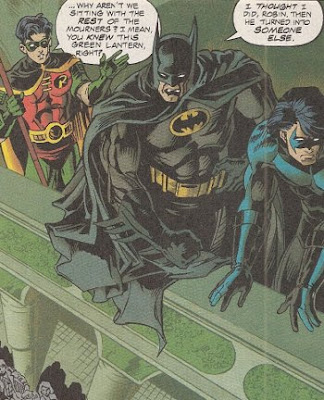 At the service, Guy Gardner spoke. So did Superman, John Stewart, Dinah Lance, Wally West, Carol Ferris, Kyle Rayner, and Tom Kalmaku (though readers didn't get to find out what Tom said until Legacy: The Last Will and Testament of Hal Jordan). After the service, Alan Scott, Swamp Thing, and Kyle pooled their powers to create a monument to Hal, including a rather nice, large statue that Kyle designed. 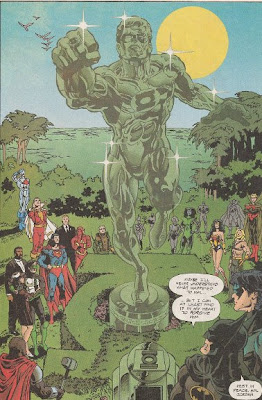 Because Hal had died reigniting the sun to save Earth, there was no burial per se. Hal's body was still floating around inside the sun, preserved by all the excess Green Lantern energy Parallax had soaked up. Still, burial or no burial, not a bad funeral, huh? And not a bad memorial. So Hal's complaints to Barry are rather groundless.

Oh, and that bit about tombstone desecration ...? Well, the only person responsible for desecrating Hal's "grave" is Hal himself -- or, rather, a younger version of him. Young Hal met up with Kyle per a time-travel mishap and was none too pleased to find out about Parallax. That he didn't take the news well is a bit of an understatement -- and he blowed up Kyle's statue real good (Green Lantern: Emerald Knights): 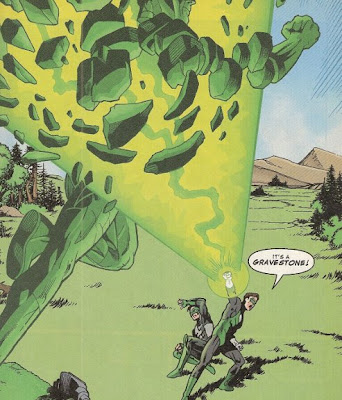 Now, there WAS a group of Green Lantern Corps members who set up a sort of anti-memorial to Hal. They created a statue of Tomar Tu on the planet Xudar that had the inscription, "Tomar Tu: GL2813 -- Killed by Universal Scourge Hal Jordan" (Legacy: Last Will and Testament of Hal Jordan). However, that's probably the WORST thing ever aimed at Hal memorial-wise.

Not long after Emerald Knights, Hal became the Spectre, and afterwards there was DEFINITELY no sign of disrespect to his memorials -- NO ONE likes messing with the Spectre. In fact, in Identity Crisis, readers were shown a memorial cemetery dedicated to fallen heroes, which included a statue of Hal. Oliver Queen used the statue when he needed to contact Hal ("...if you want to get in touch with a dead person, there's no better way than by standing on his grave"). Though Hal wasn't thrilled by this method of communication, it hardly resembled desecration -- and he probably got a kick out of using it to scare the hell out of Ollie: 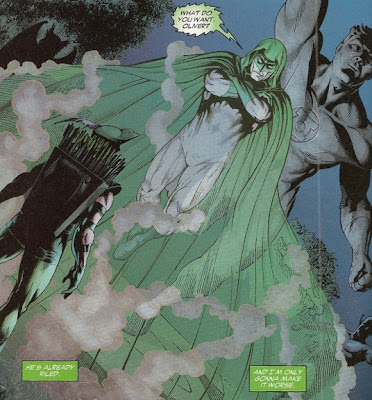 Maybe Hal just WISHES his funeral had been lousy and his memorials had been trashed by Batman or someone else. With all the guilt Hal's been carrying around, it probably just makes him feel better to pretend that he got worse than he did. 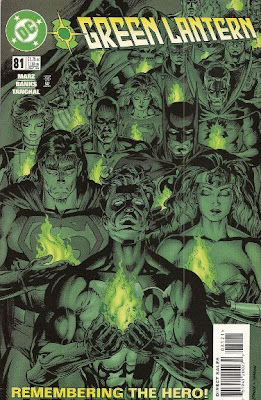 I've figured out the real reason why Geoff Johns loves Superbrat-Prime so much: his wall-punching now gives him carte blanche to muck about with continuity as much as he likes. (See Barry Allen's revised origin in Rebirth #1.)

Oh God yes, Hal is SUCH a drama Queen. His funeral was actually very nice. I remember poor Guy actually breaking down, and being comforted in the front pew by Black Canary, which made me sniffle.

Bats was snarky, but that's nothing new.

So all of this stuff that Hal is telling Barry is...as you say...probably just a bit of guilt on Hal's part, and partly just an innate desire to wallow in his own emotions for a bit. Barry certainly doesn't know any different.

On the other hand, Barry DOES know Hal pretty well, so he may be taking all this with the proverbial grain of salt.

Yeah -- On the one hand, it's easy to blame it all on Superboy punches. On the other hand, though, Hal is SO GOOD at deluding himself ...

I suspect that Hal Jordan's retcon in GL: Rebirth is the last (and, I suspect, the only) retcon of Geoff's that can be tied to Superboy-Prime's tantrums - except to the extent that the creation of New Earth was largely his fault, too. Starting with that event, Geoff's rampant "retcons" can instead be thought of as "New Earth reboots" - much like John Byrne's Superman was a post-Crisis reboot.