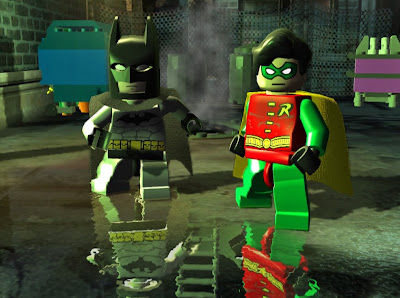 Now THIS is a fun game. Admittedly, I’ve never played any of the other Lego-based video games (Lego Star Wars or Lego Indiana Jones), so I have no basis for comparison via those games. I have this game simply because it’s Batman-based -- but there’s certainly no ignoring the Lego block element. In almost every way, the Lego element IS the game.

With that in mind, don't expect this game to take the Batman mythos too seriously. If you're expecting The Dark Knight, or expecting Batman to be treated like the sober creature of the night that he is, you're gonna be disappointed. This is LEGO, for crying out loud, so the setup is primarily for laughs. What other Batman game will allow you to take control of Robin and have him beat the living crapola out of Batman until Batman crumbles into a pile of Lego blocks? (I've also had a great deal fun having Robin smack, punch, and kick poor Alfred around the Batcave. Hey, it's about time Robin got to dish out some serious punishment!) 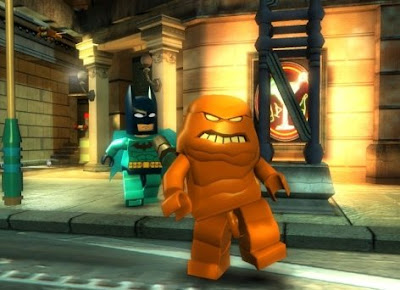 What's what and who's who from the DCU

The premise of the game is that there's been a mass breakout from Arkham Asylum, and Batman and Robin (of course) have to go round up the bad guys. The basis is less the Batman comic books and more Batman: The Animated Series -- with a few additional touches from the Burton/Schumacher Batman movies. Batman, Robin, the Joker, and all the other characters, as well as the backgrounds, structures, vehicles, props, etc., are all made of virtual Lego blocks. And when Batman slugs a bad guy, the bad guy reacts like you'd expect any bad guy made of Legos to react -- he quite literally goes to pieces.

There's also no dialog in the game. All the characters communicate via cute little gestures, squeaks, grunts, giggles, and occasional yells. Some of the vocalizations are rather funny.

Behaviorally, Batman and Robin are pretty true to form, with some humorous touches. For example, when navigating lines that stretch between buildings, Batman hangs from them and hand-walks his way across, whereas Robin merely jumps atop them and strolls across them like a tightrope. There are also numerous costume variations for both characters, designed with special functions that allow Batman and Robin to advance the gameplay. Robin's "magnetic suit," in particular, is a lot of fun to play with.

There's also a very well-designed Batcave in the game. Be careful not to have Batman and Robin step off any ledges, though, or they WILL fall into a deep, dark pit -- screaming all the way down.

And, oh, there are bad guys galore! Just about every main bad guy from Batman lore is present in the game, some as regular gameplay characters, and others as unlockable characters.

Characters in regular gameplay include:

There are too many unlockable characters to list here, but they do include Alfred, Batgirl, Nightwing, Commissioner Gordon, and Man-Bat, amongst others.

There are also plenty of vehicles (regular and unlockable) in the game, including just about every Bat-vehicle you can imagine, and (funnily enough) Penguin's submarine from the 1966 Batman movie!

I really don't like using the vehicles in the game, though, because they really don't handle well, compared to vehicles from other video games. But, then again, just how well CAN one expect a Lego block vehicle to handle? 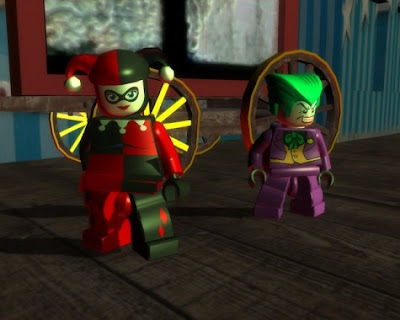 This game was VERY easy to jump right into and start playing, without really having to look up the controls. In fact, it's probably THE easiest game I've ever played, in terms of how everything handles. This is definitely a very kid- and family-friendly game, easy to play and very engaging, not dull. I'd recommend it to anyone.

Gameplay is pretty straightforward -- all you have to do is beat up and round up bad guys, and play with any little toys, costume changes, or setups along the way to help you advance your way through the game.

The REAL fun of the game comes from all of the unlockables. There are plenty of things you can look for, collect, buy, unlock, etc., etc., throughout the game. OR, after you've gone through the basic gameplay once, you can go back and play with all of the other seemingly-endless functions and mini-games in the virtual environments. You can even swap Batman and Robin for other characters and explore the game environments as Harley and Ivy, for example -- or just about any other characters you want.

Really, I only have two big complaints about this game:

1. -- and this is a BIG one -- For the PlayStation Portable (PSP), this is only a ONE PLAYER game! This doesn't make sense to me, especially since Batman and Robin are always paired up, with one character "assisting" the other. Other PSP games allow for wireless co-op playing. How hard would it have been to allow one player to be Batman and another to be Robin? Players of Wii and other platforms don't need to worry -- there IS a two-player function for those versions. However, there's STILL no online co-op play available for them. That sucks, really.

2. Okay, okay, so I'm a forty-ish female whose once-perfect eyesight ain't what it used to be. But, for crying out loud, this game is NOT the best candidate for the tiny-screened world of the PSP! I shouldn't have to wear my reading glasses just to play a video game on my PSP. Even Justice League Heroes for the PSP isn't THIS hard to see on the small screen -- I don't need my glasses to play THAT game. Game designers need to start taking scale into consideration when adapting games to the smaller platforms, like DS and PSP. You can't tell me these guys all have perfect eyesight!

Okay, that's enough griping. Seriously, Lego Batman is a fun game to pick up if you're in the market for something new -- a real keeper. I'm not up on my gaming news, but based on the toy sets Lego has released over the years, here's hoping there's a Lego Spider-Man game in the works. A Lego Harry Potter game could also be fun. Anyone out there paying attention?
Posted by Sea-of-Green at 3:19 PM

My five-year-old brother is addicted to this game -- well, this and Lego Indiana Jones. He'd play it every single night if he had his way...and he won't stop playing unless he's dragged away kicking and screaming.

One player? Is that the same on the Wii do you know? If it is that sucks, I dont' want to play it one player.

Aren't they, though. :-) I really like Lego Clayface. He's adorable!

This is by far the most enjoyable game we own on the Wii (and yes, it is very much a 2-player game on it). The Lego games are extremely well done - all of them. And you have a great assortment of geeky franchises to choose from!

The cut scenes are laugh-out-loud funny, aren't they?

Oh wow, I love the Lego video games. They are some of the few I will buy as soon as they come out, rather than sitting around waiting for the price to go down. (We run ours on the PC, and it does two-player just fine [as long as you have decent controllers for your computer].) My daughter (4-1/2) loves playing, although she prefers watching her parents play (we're more skilled at not falling off cliffs). Clayface is just adorable. Even ManBat is cute.

There is a Lego Harry Potter, from a few years back. I own it, but was not overwhelmed; it wasn't nearly as good as the newer Lego games.