Green Lantern-Green Arrow #110: "Who were those masked men?"

There are many Green Lantern stories that are deliberately humorous, but following is probably one of the most humorous stories from the Green Lantern-Green Arrow tales of the 1970s. Written by Denny O'Neal and illustrated by the incomparable Mike Grell, Green Lantern-Green Arrow #110 places Hal Jordan and Oliver Queen in a setting so full of cliches that the creative team must’ve had giggle fits while working on it: 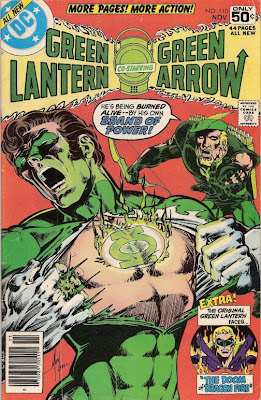 The story begins in Green Arrow’s indoor practice range in Star City. Ollie, in full uniform, is in a great mood because Roy has just given him “genuine American Indian archery gear!” He's having a good time running around in a full-blown Sioux headdress while shooting at a cowboy dummy: "Wa-HOOO! Take THAT, you cow-kissin' paleface!"

Hal is there, in his civies and slumped in a doorway. He’s decidedly bummed because Carol Ferris has just dumped him for the umpteenth time. Ollie invites Hal to stay for dinner (“Dinah’s bringing!”) and proceeds to bad-mouth Carol in an attempt to cheer up his friend. Unfortunately for him, Dinah arrives just in time to overhear all the verbal woman-bashing that’s going on. She gets a wee bit ticked off at Ollie and storms off (see Green Lantern History #4: Hal's Gals for the entire sequence).

So, Green Arrow and Green Lantern are left to their own devices. Not only that, they have free rein to go off and be idiots without Black Canary around to point out that they’re being, well, idiots.

At this time in his history, Hal is employed as a truck driver, and he has a habit of leaving his rig floating around in Earth's orbit when he's not working. (Hal must use really good antifreeze. Note to citrus distributors: NEVER hire Hal Jordan to deliver your goods.) Hal says he has to go inspect his truck, and Ollie elects to accompany him via one of Hal’s ring-generated space bubbles: “A little hop into space might be a real mood-lifter!”

While in space checking on the truck, Hal and Ollie encounter the Silver Twist. The Silver Twist is a convenient plot device that shows up fairly regularly in GL-GA stories in the mid-to-late 1970s. It's basically a large, mysterious object floating around in space that flings anyone who touches it into other dimensions or planes of existence.

Suddenly, out of one end of the Silver Twist comes a burst of energy and a figure that looks somewhat like a man with four arms (no, not Salaak). The figure disappears into the other end of the Silver Twist, but the energy discharge knocks one of Earth's nuclear-powered satellites out of orbit. The satellite plummets straight toward Columbus, Ohio.

Hal chases down the satellite and places it back into orbit, courtesy of some giant green tongs and a tennis racket. “Ohio's too nice to have a radioactive hole in the middle of its biggest city.” he says.

“Yeah,” Ollie replies, “The chamber of commerce would be really miffed.”

Because his space sector has been violated, Hal is determined to go after the four-armed alien in the Silver Twist. He gives Ollie a choice to either accompany him or be taken home to Star City. Ollie decides to come along.

Hal touches the Silver Twist, and ZAP -- he and Ollie are no longer in a traditional superhero setting: 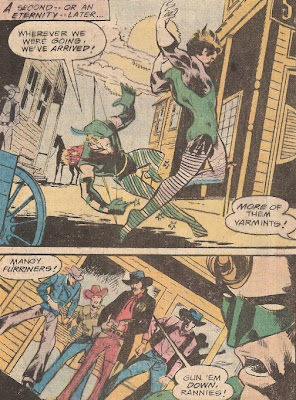 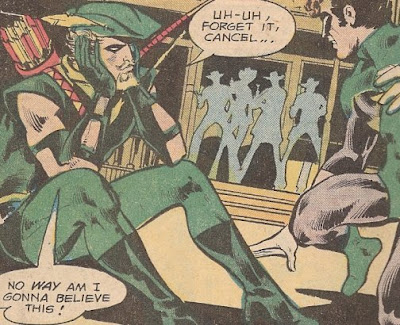 Ollie abruptly abandons his stubborn sit-down in the middle of the street when his hat gets shot off, and the cowboys start spraying the street with bullets. “Okay, OKAY--!” Ollie yells, “I believe!”

For some reason, Hal's ring isn't working properly, and instead of his regular archery equipment, Ollie has the bow and arrows that Roy gave him. Lacking reliable weaponry, Hal and Ollie take refuge behind a water trough while the cowboys continue shooting at them.

Hal tries to get his ring to work, but all it will do is fire a simple energy beam. Ever the resourceful archer, though, Ollie finds a way to put his less-than-tricky bow and arrows to use. He manages to fire an arrow down the barrel of every gun aimed at him.

“Gol-DERN!” one of the cowboys yells in surprise.

“Must be a hull tribe of redskins thar!” yells another one -- the sheriff -- who happens to be wearing a Green Lantern badge on his coat.

Suddenly, another group of gunslingers shows up: 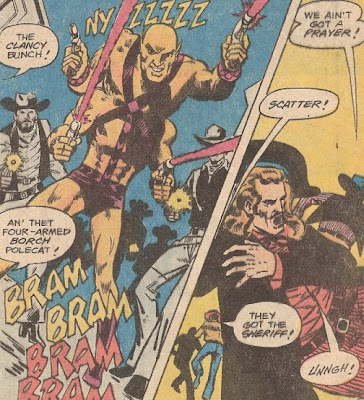 “Got a scorecard … or a rule book?” Ollie asks Hal. “Heck, I’d settle for a garden-variety explanation!”

“Our ambushers are being ambushed!” Hal replies. “Those characters circled ‘round behind them while they were plinking at us!

Just as Hal points out that the four-armed alien is the same one they were chasing through the Silver Twist, an energy weapon blasts its way through the water trough and hits Hal squarely in the chest:

With Hal down for the count, Ollie decides it’s time to make a run for it. He throws Hal over his shoulders and ducks into the nearest building, which appears to be the local saloon. Of course, the saloon is full of angry cowboys, all waving pistols at Ollie: 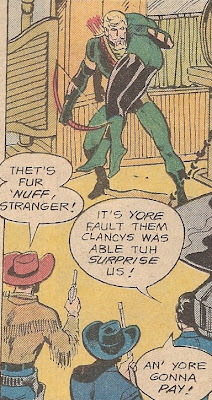 Before the cowboys can shoot, Ollie is rescued by "Miz Lulu," the local saloon madame/dance-hall floozy: 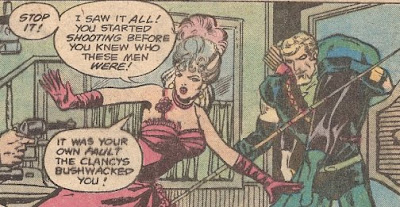 Miz Lulu instructs Ollie to place Hal on a nearby table (“I’ve doctored a bit--"), but both are shocked when they get a good look at Hal. In the middle of Hal's chest -- in the regular spot for his uniform's Green Lantern insignia -- the uniform is burned away, revealing a huge burn mark in the shape of the GL symbol. Ollie is kinda grossed out by it, but Miz Lulu seems a bit impressed.

“No guess, mister,” Lulu replies. “That's a sheriff's badge on his chest, ain't it?”

No, the sheriff who got gunned down in the middle of the street was not a Green Lantern. Ollie figures out that wherever he and Hal have landed, the Lantern symbol “stands for law and order instead of a star!”

Ollie and Lulu hasten to fill Hal in on what’s going on. Hal doesn’t seem at all concerned about having a Green Lantern symbol branded onto his chest; rather, he seems more than interested in the Wild West setting they’re in.

Since their sheriff has been gunned down, the locals elect Hal as "chief cop of Coyote Gulch,” and the Clancy Bunch is now his responsibility. Turns out the Clancy Bunch wants to turn Coyote Gulch into an “outlaw town.” The town had been successful in keeping the outlaws at bay until the four-armed gunslinger “stranger” arrived. The cowboys say the “stranger” has been around for a month, leading Hal and Ollie to determine that the Silver Twist warps time in addition to its other abilities.

“Our work’s cut out for us, right?” Ollie asks Hal. “To nail Four-Arms, we gotta whip the Clancys!”

“Afraid so,” says Hal. “Before we try, though, we’d better check our resources!”

Hal tries to use his power ring again, but it still isn’t working properly. It won’t generate force fields or allow him to fly. But Hal can't resist an opportunity to try shooting up the bar: 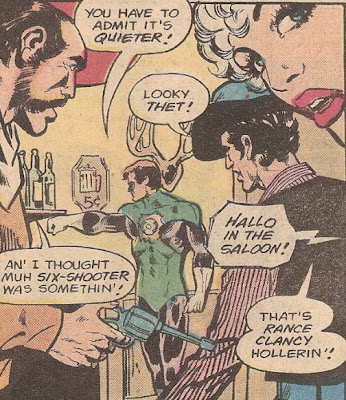 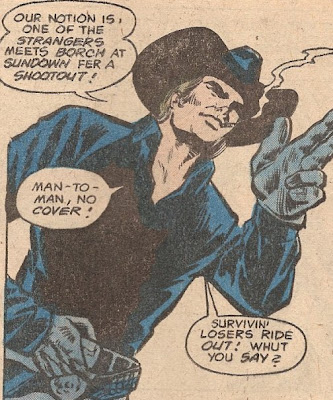 “’Borch,’ huh?” says Ollie. “Sounds like a case of indigestion!”

Hal accepts Rance Clancy's proposal, and then he, Ollie, and Lulu duck back into the saloon to plan for the upcoming shootout.

While the other cowboys are milling about in anticipation of the coming fight, and Ollie is lounging around in the background (and probably rolling his eyes), Lulu takes the opportunity to cozy up to Hal at the bar.

“You sure you want to go through with this?” she asks him.

Hal then grabs a parka from the bar, snatches a hat off a cowboy's head, and heads for the door. By the time he's outside, he's fully dressed in these items, and darned if he doesn't resemble Clint Eastwood in a Sergio Leone spaghetti Western: 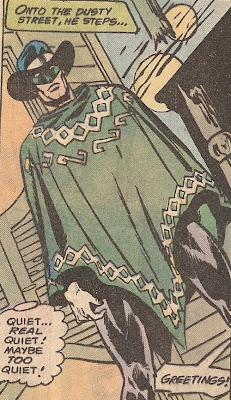 "At last ... I understand why the Lantern never misses a John Wayne movie," Ollie quips. "He eats this stuff with a spoon!"

Four-armed Borch is there in the street, waiting for Hal. Hal asks the alien who he is and why he's there, and the alien's reply is first cryptic ("I jump from existence to existence, forever seeking") and then uncoorperative ("You could not possibly understand! Nor shall I explain!"). 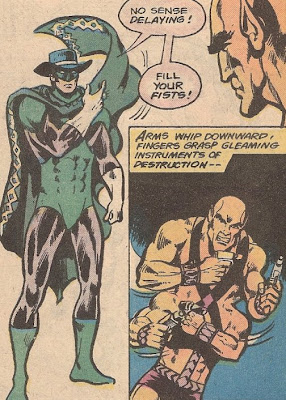 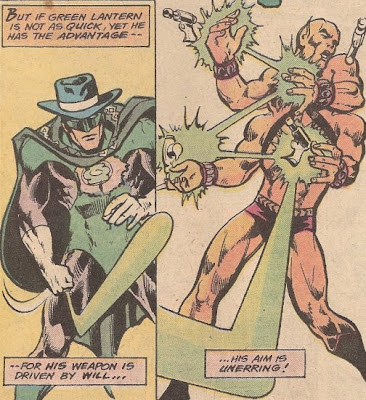 The locals run out of the bar, cheering. While the locals take Borch into custody, Hal brings up the concern that perhaps he and Ollie are trapped in this Wild West setting. Ollie isn't worried, though, because earlier when his hat was shot off, it fell into a hole in the middle of the street -- "and vanished! Looks like a rift between the universes!"

Hal and Ollie wave their farewells and jump into the rift, trusting that Hal's ring will start working properly to protect them once they're in the other universe. Sure enough, the boys end up back in their own universe, right about the time they left it, and Hal's ring is working fine. He generates a bubble around them and heads for home.

"No sign of the Twist," says Ollie. "Any further ideas about it?"

"A wild surmise ..." Hal replies. "It probes our subconscious and creates realities from the contents of our minds! You were playing Westerner -- remember?" 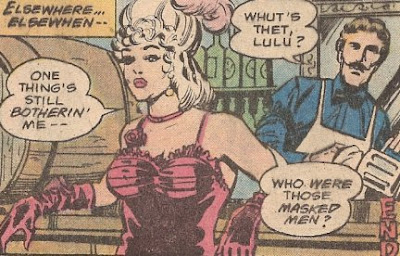 Here's a question, though: Whatever happened to the big Green Lantern brand on Hal's chest? I guess we'll never know.
Posted by Sea-of-Green at 1:56 PM

Is it me, or do Hal and Ollie come across as the Beavis and Butthead of the DC Universe, back in their hard-travelling days? What a pair of maroons!

I must admit, my favorite part is where Ollie is discussing Borch's name..."sounds like a case of indigestion!" You would certainly know, Ollie, you'd certainly know.

Yeah, it's really painful, isn't it? And, YES, Hal and Ollie were total morons when they were hanging around each other in the '70s. When they weren't fighting with each other, they were being total doofuses (doofi?). Thank goodness, Black Canary was USUALLY around to keep 'em from getting into REAL trouble.

The poncho is particular, is so horrible, that I can't stop sniggering to myself.