A favorite pastime among comic book readers involves pitting two super-heroes (two who normally wouldn’t oppose each other) against one another in a hypothetical battle, and then arguing about which hero should win the fight. One common face-off involves pitting Superman against a member of the Green Lantern Corps, usually Hal Jordan.

Fans on either side have convincing arguments over why one hero should be able to best the other. Superman fans, for example, tend to argue that “Superman is strong -- VERY strong,” or, “Superman is superior in close-quarters combat.” Like so (DC Comics Presents #26): 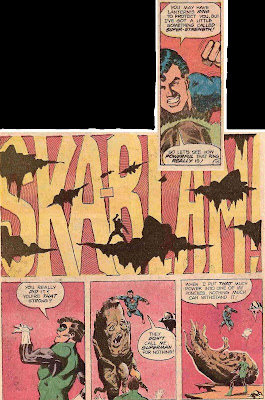 Green Lantern fans, on the other hand, have the following arguments for their heroes: “Green Lantern power rings are the most powerful weapons in the universe,” or, “Green Lanterns are superior at strategy and long-range combat.” Case in point (Green Lantern: Rebirth): 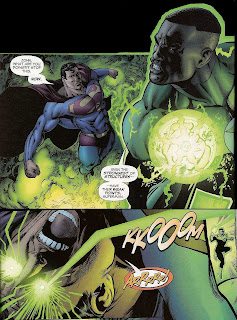 There have actually been quite a few altercations between Superman (and his fellow Kryptonians) and various Green Lanterns over the years -- enough to give the impression that Superman and Green Lantern are pretty evenly matched. Superman obviously has the clear advantage in some areas, and Green Lantern has the advantage in others. If nothing else, the potential opponents have learned enough about each other by now that any real fight between them (that is, any fight that doesn't involve some sort of alien possession, or mind control, or crazed relative/team member, or stolen power rings, etc., etc.) would be pretty darned interesting.

First, here are a few items that various members of the Green Lantern Corps should have learned about Superman (and Kryptonians) over the years -- assuming the lessons got through the Green Lanterns’ notoriously thick skulls: 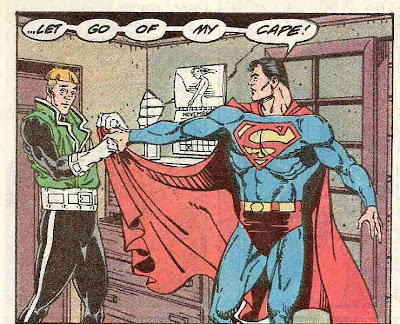 2. Never get fresh with one of Superman’s female Kryptonian relatives. (Justice League International #56) 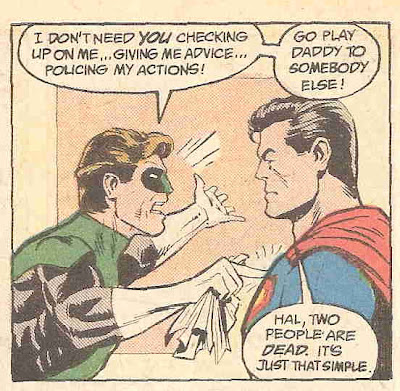 ... because he’ll only make you feel guilty about it later. (Green Lantern Special #1) 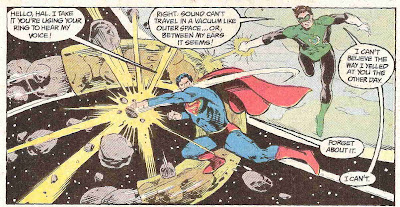 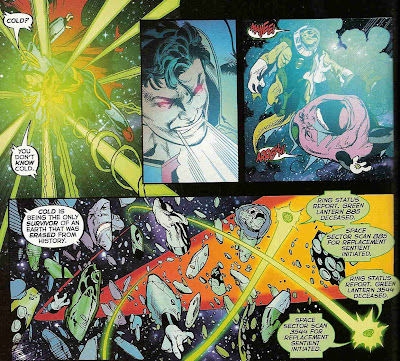 At the same time, Superman and his Kryptonian relatives need to make sure they don’t forget a thing or two about the Green Lanterns: 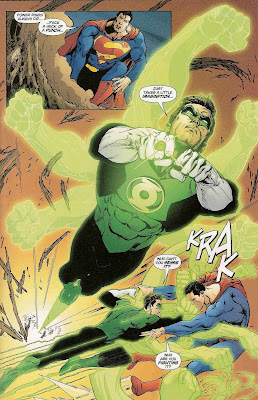 2. Hal Jordan isn’t afraid of you. In fact, he thinks Batman is more dangerous than you are. (Legacy: The Last Will and Testament of Hal Jordan) 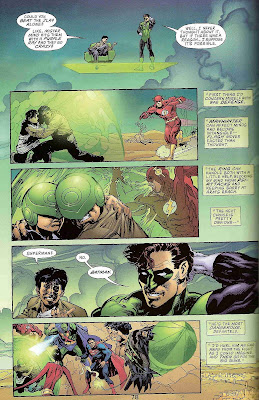 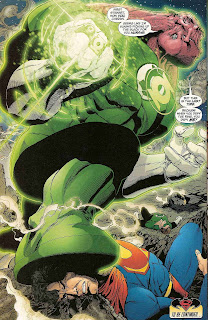 4. Even if you defeat one Green Lantern in combat ... 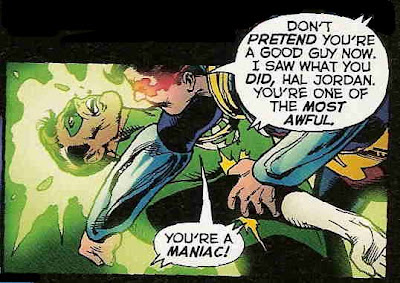 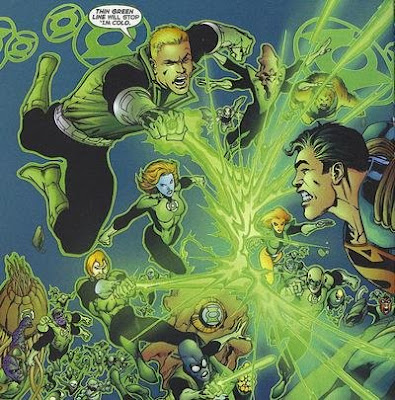 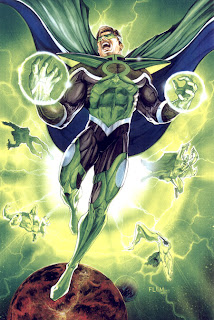 PART II: Superman vs. Green Lantern
Posted by Sea-of-Green at 8:16 PM Links to this post

Green Lantern Hal Jordan, and his family and close associates, are known by comic book readers to hail from southern California -- from fictional Coast City, in fact. In many ways, Hal Jordan is definitely a California boy -- but, strangely enough, there’s also a small Indiana connection to the character. A couple of Indiana connections, in fact.

The main connection involves Hal’s old friend and aircraft mechanic, Tom Kalmaku. Tom was originally from Alaska, but ended up in Coast City, California, where he and Hal both worked for Ferris Aircraft. In between stints at Ferris Aircraft, though, Tom and his family actually lived in Indiana for a time -- not so unusual for a mechanic of his caliber, considering Rolls-Royce designs and manufactures aircraft engines in Indianapolis.

Long before Tom Kalmaku moved there, though, Hal Jordan himself once showed up in Indiana and went into action as Green Lantern.

In an “offbeat exploit” called “Yellow is a Dirty Little Color” (Flash #224, 1973), written by Denny O’Neil and illustrated by Dick Giordano, an unemployed Hal Jordan and his “dusty, sputtering” station wagon roll into a small town that looks suspiciously like Greencastle, Indiana (irony of ironies). Hal (who was usually unemployed in those days) is looking for a place to cash his unemployement check so he can buy himself some dinner.

As usually happens to super-heroes when they’re in civilian garb (because part of what makes them super-heroes is the fact that they’re such incredible trouble magnets), Hal finds himself witnessing a robbery. A crook is making off with a bag of loot from a local store proprietor.

Super-hero that he is, Hal immediately switches to his Green Lantern uniform and chases down the robber. Hal subdues the crook easily, though he is surprised when the crook tries to use the bag of loot as a shield against Hal’s power ring. Shrugging off the incident, Hal then hands the crook and the bag of loot over to the store proprietor and the local sheriff.

“Green Lantern!” says the sheriff. “I always thought you were too big to bother with us Hoosiers, but thanks!”

“Yeah -- Thanks for nothing’!” growls the store proprietor who was robbed.

The bag of loot turns out to be empty. The store owner accuses Hal of accidentally disintegrating the cash via his power ring, and the robber has to be set free due to lack of evidence. The previously grateful sheriff then tells the pesky, troublemaking super-hero to “GIT!” -- which Hal does, feeling totally bewildered by what’s happened. 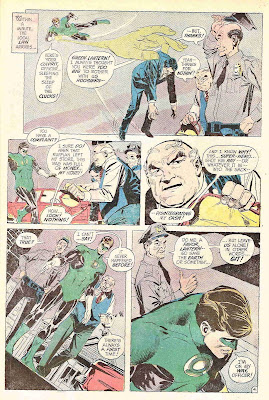 Hal, still in his Green Lantern uniform, retires to a local campground for the evening, where he proceeds to throw a first-class temper tantrum -- as only Hal Jordan can. He even kicks his power battery across the camp while indulging in a fit of self-pity: “Maybe I should have kept my test-pilot job … or stayed an insurance investigator! Back then, at least I had something besides my Green Lantern identity! Hal Jordan counted! Used to be I had nothing to fear except yellow -- that dirty little color my ring is powerless against …!”

Suddenly, Hal stops and has a bit of an epiphany: “I was an insurance investigator ... and yellow is a dirty little color -- and I have been a blind, self-pitying fool!”

As it turns out, the inside of the bag was not only empty, it was yellow. Good thing Hal noticed (and finally got around to remembering) that little detail. The store proprietor and the robber were apparently in cahoots, planning to collect insurance money from the “stolen loot” -- classic insurance fraud. Green Lantern's intervention had merely provided an opportunity that made their plans go more smoothly.

Hal finds the fraudsters and rounds them up for the sheriff, explaining that his power ring couldn’t have disintegrated the money because the inside of the bag was yellow. Since his ring (at that time) didn’t work against anything yellow, it couldn’t have harmed anything in the bag. The bag had been empty all along.

Well, the sheriff is mighty apologetic to Hal and thanks him kindly for solving the mystery and catching the bad guys. And, in true, generous Hoosier Hospitality fashion, the sheriff and the district attorney clear things so Hal can keep the bag as a souvenir, per Hal’s request. 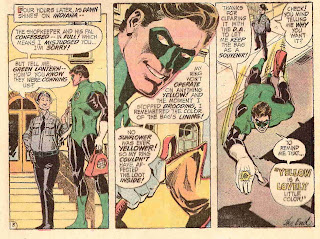 So, the exploit turns out to be an interesting little character study in which Hal Jordan (traditionally an incredibly brave and heroic yet arrogant character) finds himself somewhat humbled. An "offbeat exploit" indeed.
Posted by Sea-of-Green at 7:50 PM Links to this post

Even Batman Likes the Indy 500

The race also seems to have fans in the world of fiction. Take, for example, this panel from Batman: Ego, written and illustrated by Darwyn Cooke: 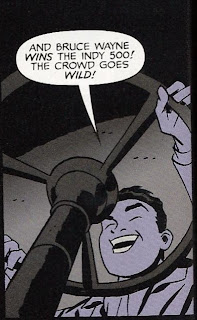 It seems that Batman, alias Bruce Wayne, is also a fan of the Indianapolis 500 -- or at least he was when he was a child (and a lot less grumpy).
Posted by Sea-of-Green at 9:00 PM Links to this post